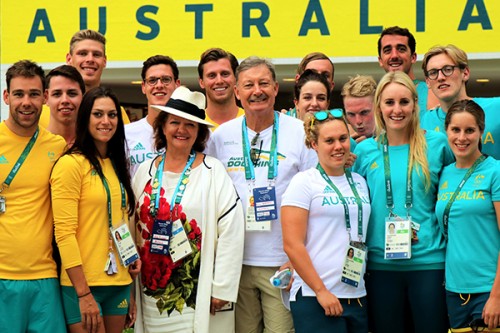 Swimming Australia has announced the extension of their principal partnership with Hancock Prospecting and the Georgina Hope Swimmers Foundation for a further four years.

Hancock Prospecting Chair Gina Rinehart, has been involved with swimming since 1992, with Hancock Prospecting and the Georgina Hope Swimmers Foundation backing Swimming Australia as a major partner since late 2012. The partnership began as other sponsors deserted the sport in the wake of poor performances and misbehaviour at the London Olympics.

The new deal means the Australian swimming team has sponsor support to the Tokyo 2020 Olympics.

As five-time Olympic gold medallist Ian Thorpe said in his key note address at the Swimming Australia Gala Dinner on Sunday 6th November, Rinehart was there for the sport when others had wavered.

Welcoming the continued support, Swimming Australia President John Bertrand stated “swimming in Australia has such a rich history; it is of national importance.

“Mrs Rinehart is a very proud Australian and an incredibly successful business woman. She recognises the importance of swimming to the Australian psyche and her unwavering support has been key as we built the team and developed a world class culture over the last four years.”

Rinehart said she is proud of what the team has achieved and the respect they have earned in and out of the pool around the world, adding “Hancock Prospecting along with the Georgina Hope Foundation want to ensure Australian swimmers have the best opportunities to train and compete on the world stage. I am very pleased to repeatedly hear that the Australian Dolphins Swim Team are again on the up and up, they are on an exciting journey.

“I am proud to be their patron and a minor part of it.”

At the recent Swimming Australia Gala Dinner, Rinehart presented the inaugural Patron Awards to four swimmers that reflected and represented her company’s core values of leadership, respect and excellence.

In late August, Hancock Prospecting and the Georgina Hope Foundation also agreed a four-year sponsorship with Rowing Australia and the Australian rowing team until September 2020.