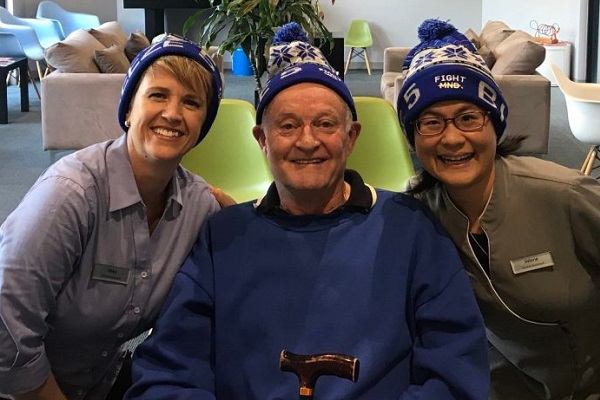 Ruddock remains one of ASCTA’s longest serving members, whose contribution to swimming coaching in Australia dates back to the 1960s and he has positively impacted on the lives and careers of so many since then.

And despite contracting Motor Neurons Disease some 27 years ago, he has defied all the odds and ‘keeps on keeping on’ - an inspiration as ASCTA prepares to celebrate its 50th Anniversary.

Ruddock’s story dates back to 1967 when alongside Bill Grabowsky and Harry Belfrage, he helped establish and conduct a highly successful Education and Coaching Development Scheme with poolside clinics conducted in various Victorian country towns.

This included sending all clubs detailed monthly training programs as a means of improving swimming, and coaches of the clubs joined the Victorian Swimming Coaches Association.

In 1969 the Victorian courses were reviewed by John Kilpatrick and Peter Ruddock, who recommended a three-tier structure that brought coaching and teaching together.

The Elementary Teacher of Swimming Courses were conducted on an honorary basis by these two people to help achieve an increase in qualified teachers and coaches with many physical education department teachers also attending these courses.

The first Advanced Teacher of Swimming Course was conducted at Jim O’Doherty’s pool a course had 200 coaches in attendance, and hence many of the club coaches joined the Victorian Swimming Coaches Association.

Ruddock assisted with the organisation of another forum in Melbourne in 1975. At this major coaching seminar with a ‘who’s who’ of US and Australian coaching - including Prof. Brent Rushall, alongside the legendary Dr James Counsilman, Forbes Carlile and Terry Gathercole who were the primary speakers.

Coaches from all across Australia attended, with a total attendance of 260.

Then came the first hint of a problem when the hard working school principal, former top swimmer and swimming coach, resumed his daily run after a two-week break.

Ruddock recalls "I couldn't get my legs working and I thought I had pulled a muscle. I went to the doctor and he sent me to a physio. Saw the physio for a couple of weeks, he said he didn't know what was wrong and sent me back to the GP. The GP said he'd send me to a neurologist.

However, he was soon diagnosed with motor neurone disease back in the 1990’s and told he had six months to live.

He was principal of Doncaster Gardens Primary School when the symptoms first appeared and he worked on for another seven years.

In the early 2000s his voice became affected, slowing his speech considerably while he suffered unpredictable laughing and crying.

Since then he tried biking but fell over due to imbalance. Then he took up the recumbent tricycle. In his late 60s he was pedalling 14 kilometres a day getting up to 37km/h.

Even with a debilitating disease, Ruddock still marked examination papers for aspiring swimming coaches, completed book reviews for the ASCTA Journal Swimming in Australia on a regular basis and has remained actively involved in the ASCTA Victoria Branch over the past seven decades.

He has been inspirational advocating for raising funds for Motor Neuron Disease collecting millions of corks then promoting beanies for sale to assist with research into MND and more recently assisted the ASCTA staff to more comprehensively flesh out the history of our organisation.

Romania-born Ursu passed away in October 2018, aged 78, after a long illness.

A man who had a stellar swimming and water polo career in Romania and who would leave his mark on the sport of swimming after eventually settling in Albury-Wodonga, where he would start his coaching career and eventually steer the future of coaching in Australia.

Ursu was on the cusp of selection for the 1956 Melbourne Olympic team in the 100 and 200m backstroke but Romanian authorities deemed him too young, aged just 16 at the time.

He left Bucharest bound for Canada but fittingly he would eventually make it to Australia - the country that would become his home and the place where he has left an indelible mark on the sport of swimming and the coaching fraternity.

After a stint in Sydney as a mechanical engineer, Michael settled in Albury-Wodonga where he returned to pool deck in the 1980s and 1990s as a coach.

Mediocrity was not his style and at times he aimed impossibly high and rapidly succeeded and it was a move to Cairns and the Trinity Anglican School where he would take the program to the most successful outer metropolitan swimming club in the greater Queensland at the time.

Ursu didn’t just confine his passion for inspiring others to swimming and water-polo - he also coached world-class triathlete, Rebekah Keat, when she lived in Albury and according to Keat was “the man who changed my life and I talk about him often”.

Ursu would channel his passion for swimming and coaching as the inspirational Chief Executive of ASCTA from 1993 - 2005 and during this reign he professionalised the association through innovation and ideas for change.

Former ASCTA President and current Swim Australia board member, Tony Shaw noted “there was a real freshness about his approach. He was the heart and soul of ASCTA! His vision in coach education and accreditation saw ASCTA grow from an organisation making ends meet into a viable and sustainable organisation

“Another example of his innovative approach was the establishment of Swim Australia. Following a visit to USA, he brought this concept back and evolved it for Australia as one of ASCTA’s key brands.

“He was a member of the selection committee for the International Swimming Hall of Fame, a coach, an author of many swim articles, a leader of coaches, who was instrumental in the ongoing growth and development of ASCAT and coach education, a father and grandfather.

“Michael was such a gentle, intelligent and truly genuine man. He always had the swimmers interest at heart, from the very littlest of our water babies to our elite. He was a true leader and an inspiration in every way. He was always keen to see swimming for all no matter if it was for safety, sport or just fun. His passion could never be doubted and he had a lot of respect from so many in the sport and the broader swimming community.

“In the year 2000, Michael was awarded the Australian Sports Medal by the Prime Minister, John Howard and he went on to become President of the World Swimming Coaches Association between 2005 and 2009.

“It is an absolute privilege for me to recognise Michael’s outstanding contribution to our sport ... I only wish he could have been here in person to accept this himself.

“However, sadly Michael passed away in October 2018 and coaches everywhere owe him a great debt of gratitude.”