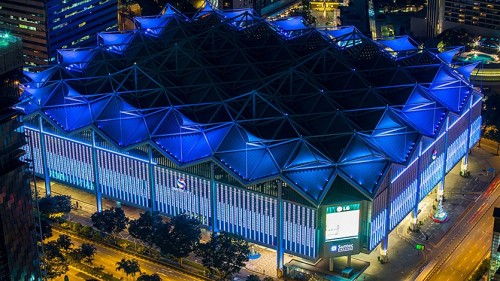 Suntec Singapore has again edged out its competitors across Asia, winning the title of 'Asia's Leading Meetings and Conference Centre' at the World Travel Awards for a sixth year.

Speaking from Bangkok, where the awards ceremony was held, Suntec Singapore Chief Executive Pieter Idenburg explains "to be recognised as Asia's Leading Meetings and Conference Centre for the sixth consecutive time in a row is more than just an honour for the team.

"Winning this award in light of sprouting venues (both locally and regionally) provides the inspiration and motivation to continue reaching higher. Being lauded best in our class further validates our standing as a venue of choice.

"This success will further motivate the team in our never-ending pursuit for service and operational excellence."

Described as the 'Oscars' of the travel and tourism industry, the World Travel Awards are the industry' s most comprehensive. They involved a phenomenal 213,000 participants in the voting process.

Suntec Singapore is a world-class venue located at the heart of Asia's most integrated meetings, conventions and exhibitions hub. With 100,000 metres2 of versatile floor space over six levels, this award-winning facility can cater to events from 10 to 20,000 persons.
In addition, Suntec Singapore offers direct access to 5,200 hotel rooms, 1,000 retail outlets, 300 restaurants, six museums and the region's newest centre for the performing arts, Esplanade - Theatres on the Bay.

For more information go to www.suntecsingapore.com