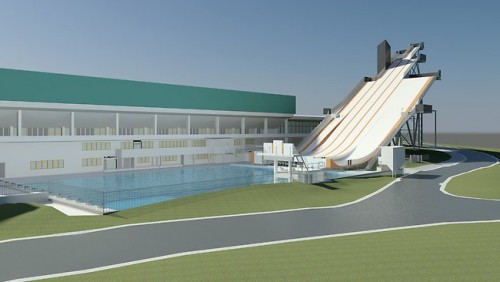 A new facility featuring a ski jump ramp over an Olympic-sized pool will be built at Lennox Head on the NSW North Coast by 2018.

The NSW Government is allocating $5.9 million for the ramp and high performance centre at the Lake Ainsworth Sport and Recreation Centre that will feature an Olympic sized swimming pool and water jump training ramp.

It will feature a lift allowing athletes to perform a greater number of practice jumps in a session which provides a significant competitive advantage.

Announcing the funding for the facility, NSW Minister for Sport Stuart Ayres said the facility will be suitable for various sporting disciplines, with a major focus on winter sports.

Minister Ayres sated “this is a game changer for Australian athletes when it comes to Winter Olympic preparation.

“Our athletes currently have to train at an antiquated facility in Victoria or travel overseas for the vast majority of their training programs. It will be best suited to our aerial skiers, snowboarders and mogul skiers.”

A similar facility was planned for Brisbane’s Sleeman Sports Complex in 2011 by Queensland Premier Anna Bligh’s Government but was scrapped in 2012 by the Campbell Newman Government.

Australian freestyle skier and Vancouver Winter Olympic gold medallist Lydia Lassila has been campaigning for the facility, which will be the first of its kind in the Southern Hemisphere, for many years.

She said Australian athletes often had to base themselves in Switzerland, the USA and Canada to gain access to word-class facilities like the one to be built in Lennox Head.

Lassila told the ABC “we spend a good nine to 10 months away every year, which makes it difficult to connect with your family and friends and study.

"Having a facility at home allows you to live a normal life and gain a large edge over the rest of the countries."

Lassila said Lennox Head made sense as a location because winter athletes did much of their training on water, adding “a lot of people don't realise we train on water ramp facilities for about six months of the year, so it's where we get to learn and refine our tricks.

"We refine our skills, repeat them and transfer them to snow.

"We land in aerated bubbles, so there's a bubble system at the bottom of the pool that shoots up air to break the surface area of the pool and make it a little bit softer to land in.

The centre will cost $10 million and will be jointly funded by the NSW Government, Australian Sports Commission, and Australian Olympic Committee through the Olympic Winter Institute of Australia.

The centre, which will be officially recognised as an Olympic training venue, is expected to be completed in 2018.

Snowbaorders are also currently able to train at the Australian Institute of Sport Aerial Surf Skate Training Facility at the Surfing Australia High Performance Centre at Casuarina, also on the NSW North Coast.