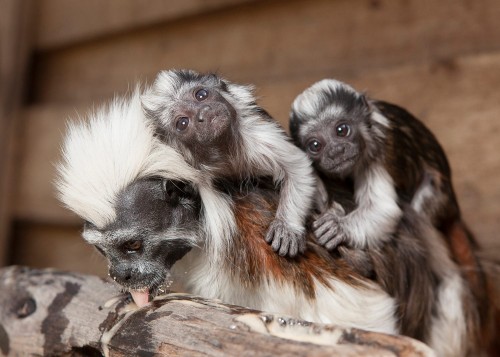 Seven of eight rare monkeys stolen from Wollongong's Symbio Wildlife Park have been reunited with their keepers.

Police yesterday found three members of a family of four cotton-top tamarins in a cage the thieves dumped in parkland in Auburn, in Sydney's west.

Four tiny pygmy marmosets were left at a veterinary clinic in the same suburb.

One monkey is still missing and police have not yet tracked down the people responsible for the theft.

Police said detectives identified a blue Honda Civic they believe was used in the theft at Symbio Wildlife Park.

The Honda was traced and found at a house in Parramatta on Tuesday.

They were then lead to parkland in Auburn, where they found three of the cotton-top tamarins in a cage that had been dumped.

NSW Police advised that the four marmosets were found yesterday at a veterinary clinic in Auburn, stating "Police reunited the seven monkeys with their relieved and very grateful keepers last night."

Detectives are still looking for the fourth tamarin.

Anyone with information that might help police should phone Wollongong police via Crime Stoppers on 1800 333 000.