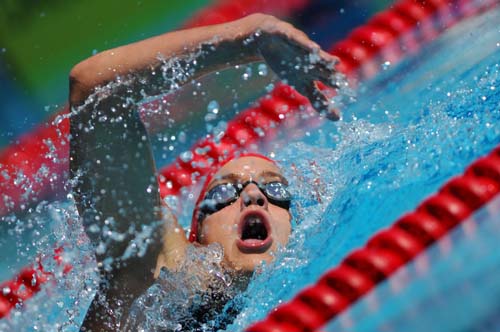 State Swim has raised in excess of $25,000 through its involvement in Trailblazer on 9th and 10th October and associated fundraising activity for Operation Flinders.

This follows on from last year when the group raised what was then a record amount of $17,000.

State Swim Chief Executive Julie Stevens explains that the group was a strong advocate of the importance of children learning to swim, not only from a safety perspective, but also in terms of developing their self-confidence, fitness and wellbeing, explaining "State Swim is focused on providing similar opportunities for our employees and in line with that we have a comprehensive wellbeing program in place, called 'Vitality for Life'.

"Being involved in Trailblazer is an important focus of that program throughout the year â both from a fitness perspective but also reflecting our desire to give something back to the community."

A total of 61 State Swim employees, aged from 20 to 60, participated in the 2010 Trailblazer Event, with each staff member either walking or running 18 kilometres or 34 km.

State Swim employees have been fundraising for the past six months and efforts have included a quiz night, raffles, sausage sizzles, swimathons, cake bakes and collection tins at each of the swim schools. Friends and family have been encouraged to donate either online or via sponsorship books.

"As a result of their outstanding commitment to not only taking part in the event, but also the fundraising aspect, they have been our highest fundraising group.

"We sincerely thank State Swim for their invaluable assistance to the work of Operation Flinders and the other charities that benefit from the Trailblazer Challenge."

A masquerade ball was held on 15th October to celebrate State Swimâs involvement and achievements in The Trailblazer Challenge.

State Swim has committed to being involved with Trailblazer again next year â its third year â where it will look to bring its total fundraising effort to $70,000 for the three years.

State Swim was also a finalist in the 2010 South Australian Training Awards.

Its 400 instructors range from university students who use the opportunity to be a swimming instructor as a way to earn income to support themselves during their studies, through to mature age people who, in one instance, are aged more than 70 and who just love the opportunity to teach others to swim.

State Swim works with its preferred training provider, World Aquatics, to provide new recruits with the opportunity to undertake a Certificate III or IV in Sport and Recreation.

The course is primarily designed for people who are either choosing their first career, or are looking for a career change, but have no formal training in the aquatic and recreation industry.