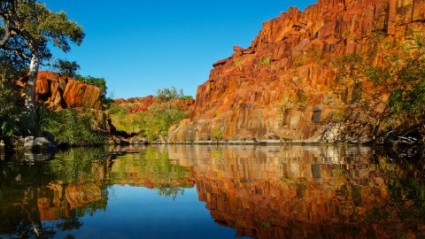 The Western Australian Government has approved the creation of the Murujuga National Park on the Burrup Peninsula in a move welcomed by tourism operators in the region.

The head of the Visitor Centre in nearby Karratha says the newly named National Park will boost the Pilbara's tourist market.

Karratha Visitor Centre Chief Executive Barry Harris stated that the establishment of the Park "is a fantastic day for the Pilbara."

The Park will feature swimming, fishing and boating facilities, as well as hundreds of thousands of pieces of Indigenous rock art. It will offer camping facilities for hikers and trekkers and a small visitors centre at Deep Gorge.

The establishment of the Park is expected to protect about 5,000 hectares of the north eastern part of the Burrup Peninsula and marks the third national park to be created by the present Western Australian Government including Dirk Hartog Island and Prince Regent River National Parks.

The Murujuga Aboriginal Corporation (MAC) will lease the land back to the State in order to create the park. In 2003 the MAC's Native Title agreement ensured the return of their country to them. With the land leased to the Western Australian Government, the Department of Indigenous Affairs will outline the management operations for the park during the next ten years.

According to Western Australian Minister for Environment Bill Marmion it is the first joint management agreement to be reached under the amendments made to the Conservation and Land Management Act in March 2012.

Minister Marmion explained "the new Murujuga National Park will provide for the protection of the areas nationally important conservation and cultural values and is an excellent example of a partnership that balances the protection of ancient and living heritage with sustainable use of the region's natural resources."

Barry Harris adds that tourism operators are looking forward to working hand-in-hand with the MAC, adding "it will be great to see those rock art tours happening out there and having experienced guides taking our leisure visitors out there, it's going to be fantastic."

Harris says the rock art will be a major drawcard for tourists.

"The fact that it has been deemed a national park means it's safe from any more encroaching industry that may be happening out there."

Roebourne Shire Chief Executive Chris Adams says the shire is thrilled to have a national park on Karratha's doorstep.

Adams explained "we will work closely with the Department of Environment and Conservation and the Murujuga Aboriginal Corporation regarding the management and maintenance of the park.

"We will have some responsibilities in relation to roads, paths and litter, so we will be working closely with them on the management and the implementation of the management plan.

"It means that we'll start to make good use of an asset that has been under-recognised and undervalued.

"We believe that this will become a major asset to the community from a tourism perspective and also help people understand the long history and culture of the region."

The WA Greens and traditional land owners are campaigning for the region to receive World Heritage listing.

For more information go to www.pilbaracoast.com/