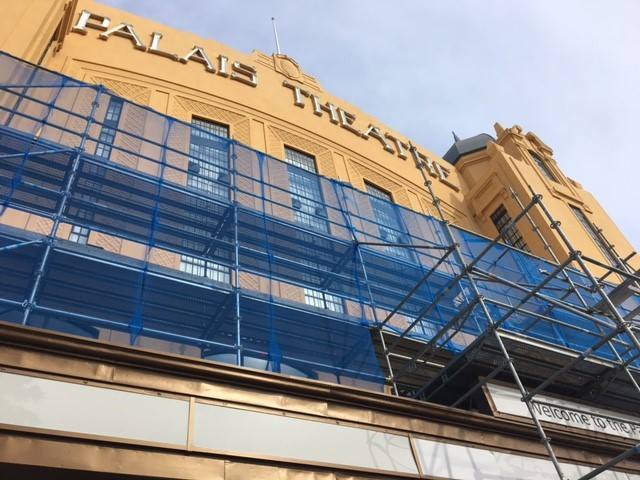 After a $26 million refurbishment, St Kilda’s Palais Theatre is set to reopen to the public on Thursday for the St Kilda Film Festival.

Having nearly closed in 2014 after its operators said it was too expensive to maintain, the 90 year old venue has been upgraded as a result of investment from the Victorian Government, the City of Port Phillip and new operator Live Nation.

The project has seen the venue’s historic repaired, repainted and returned to its original 1927 colour and the installtion of a new state-of-the-art light system, making the Palais a key focal point of the St Kilda skyline once again.

The automated light system can be programmed to turn any colour or pattern and will illuminate the theatre inside and out, creating a spectacular light show.

The historic Palais Theatre sign has also been reinstalled following a complete restoration and will be linked into the new light show.

These new features will create a sense of excitement and anticipation for audiences as they approach the building, wait in the foyer and then take their seats before the performance.

The refurbishment has also resolved the building’s critical maintenance and infrastructure issues including upgrades to the theatre’s electrical system, fire protection and hydraulic systems.

Restoration followed a widespread community campaign, including a brief run for Parliament from musician Tex Perkins, that led the Victorian Government to step in and save the venue.

Live Nation is also undertaking an internal works program in March to ensure the interior of the building matches the grandeur of the façade.

These works, which include restoration of the foyer and the Palais Theatre’s historic ceiling domes, will continue over the coming months around scheduled events.

The famous venue has witnessed many famous performances over the years, with The Rolling Stones supporting Roy Orbison on its stage in 1965, while years later artists like Tom Jones, Midnight Oil and Cold Chisel performed at the bay side venue.

Commenting on the reopening, Victorian Minister for Creative Industries Martin Foley stated “generations of Victorians have enjoyed countless nights of entertainment here and long may that continue.

"It really is the beating cultural heart of St Kilda and is just so important to the cultural renaissance that we're seeing going on and that will just drive the reinvigoration that we are seeing."

Live Nation currently has a 30-year lease to operate the theatre.