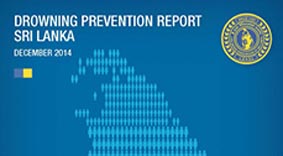 To coincide with the 10 year anniversary of the Asian Tsunami that devastated the Sri Lankan coast on 26th December 2004, Life Saving Victoria (LSV), the Life Saving Association of Sri Lanka and the World Health Organisation have released the inaugural Drowning Prevention Report for Sri Lanka.

Since the tsunami, drowning continues to be a significant cause of death and injury in Sri Lanka.

It can be estimated that 8,500 people have drowned since the 2004 Tsunami, with the report finding that an average of 850 drowning deaths occur in Sri Lanka deaths each year. This is an equivalent death toll similar to the tsunami every 40 years.

To date, the extent of the issue, the characteristics of drowning victims and the activities they were undertaking at the time has not been analysed at a nation-wide level.

Dr Matthews explains "many of the contributing factors found in the Sri Lanka drowning report are similar to those we experience here, including consumption of alcohol, not wearing life jackets and lack of supervision and lack of swimming ability and/or water safety skills."

worldwide, drowning has a devastating impact - every hour, every day, more than 40 people lose their lives to drowning.

The world health organisation's first global report on drowning, released in November found that 372,000 people drown worldwide each year, with more than 90% of drowning occurring in low and middle income countries, such as Sri Lanka.

Dr Matthews says that in partnering with the Life Saving Association of Sri Lanka and the World Health Organisation, Life Saving Victoria has been able to provide world class expertise to support Sri Lanka in developing a strategic approach to tackling the problem of drowning at a nation level.

Dr Matthews added "for LSV, this partnership is a long-term international relations strategy to assist a developing nation in building a national drowning prevention strategy and capability, in line with global recommendations, which can ultimately reducing the number of lives lost to drowning.

"Alongside the improvements to emergency preparedness and response services that have been made since the tsunami, there is also a need to equip individuals with basic swimming and water skills and knowledge.

"A number of deaths attributed to the tsunami may have been prevented if more people possessed these skills and knowledge.

"Over the past three years, Life Saving Victoria has been working in Sri Lanka to provide lifesaving training to international lifesaving standards to more than 11,000 local candidates, including volunteers with Sri Lankan lifesaving clubs, as well as the police, coast guard and armed forces.

"Providing our expertise in these areas is an important way that we can contribute as part of Australia's overseas aid efforts, while for the people of Sri Lanka, lifesaving has also become an important way for reconciliation.

"Since the end of the civil war in Sri Lanka in 2009, many personnel from the armed forces have been deployed to lifesaving services in Sri Lanka, with a number of lifesaving clubs and services represented by Sri Lanka Air Force, Sri Lanka Civil Security Department, Sri Lanka Navy and Sri Lanka Army.

"This has led to a significant expansion in the provision of lifesaving services in Sri Lanka and hundreds of rescues each year, particularly in areas that were previously battlegrounds.

"Military personnel can also apply these skills to assist in future emergency situations, such as flood events or in the case of another tsunami."