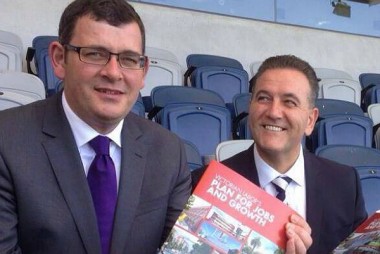 New Victorian Premier Daniel Andrews has united sport and recreation with tourism and major events with the appointment of John Eren as Minister for Sport and Minister for Tourism and Major Events in his new cabinet.

Minister Eren, who will continue in the roles he held in the Shadow Labor Ministry, was responsible for an election announcement that Labor will spend $100 million upgrading community sporting facilities over the next four years, backing now Premier Andrews who suggested during the election campaign that improved sporting facilities will encourage more community participation.

Premier Andrews said he wanted to make sure every family could be actively involved in community sport, stating "if we don't have fit-to-purpose facilities, particularly female change rooms, then we're holding back to so many from involved.”

Premier Andrews said his new Government would allocate money to clubs via grants, adding “we’ll work with local government, we'll work with peak bodies like Cricket Victoria to make sure that... we get the best value possible."

Other appointments in leisure and related portfolios in the new Victorian Cabinet are: