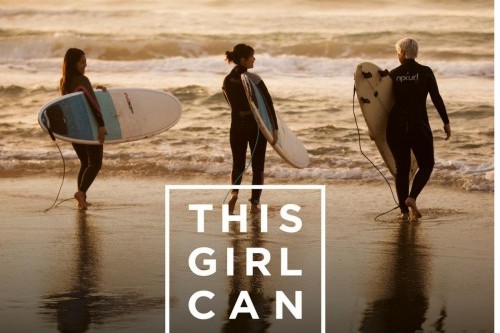 Sport England's highly successful This Girl Can campaign has made its first outing outside the UK, following the launch of an all-new version in Victoria.

Adapted by health promotion agency VicHealth, the campaign, which hit screens at the end of March, is a local version of the world-famous viral campaign by Sport England which inspired an incredible 3.9 million British women to ditch the couch and get active.

This Girl Can - Victoria aims to build upon this success and empower women across the state to get active and overcome feelings of judgment which new VicHealth research shows is stopping them from getting active.

The ad features everyday Victorian women - no airbrushed Instagram models - overcoming their fears and giving it a go, curves, jiggles, wrinkles and all. The women, from all across Victoria, participate in a range of activities from boxing, cycling and roller-derby to netball and AFL.

Advertisement's feature netballer 'Sally' participating despite being told she’s "too old to play" and while 'Tina' gets on her bike even after someone yells out "fat chicks shouldn’t wear lycra".

Announcing the campaign, Victorian Minister for Health Jill Hennessy stated “this Girl Can – Victoria shows everyday women getting out there and having a go. This campaign is all about getting Victorian women active, feeling proud of themselves and reaching their goals.

“In Victoria, only two in five of us do enough physical activity to be healthy and we know that women in particular are less active than men. We want to inspire as many women as possible to get active and prove that in Victoria, all women and girls most certainly can.”

VicHealth Chief Executive Jerril Rechter said the fear of judgment – as well as actual experiences of judgement – stop too many women from being physically active, adding “over half of Victorian women worry about being judged while exercising and for over 40% this feeling of embarrassment or intimidation is so strong it actually stops them from taking part in sport or exercise.

“Concerns about how they look, that they aren’t skilled enough or that they should be prioritising their family or work over exercise are genuine obstacles for women. However, we know if women can identify themselves in advertising and in the media, they’re more likely to overcome this fear of judgement.

“This Girl Can features everyday women staring down their critics and getting active regardless of how they look or how sweaty they get.

“This campaign isn’t about making women feel bad about not doing enough exercise. It’s about celebrating what they can do, even if that’s just a walk around the block or a few laps of the pool.”

Sport England Chief Executive Jennie Price said she was proud to partner with VicHealth on bringing This Girl Can to Australia.

Price advised “we’re really proud of our partnership with VicHealth. This ad is visibly part of the This Girl Can family - but it’s your campaign … it’s all about Victorian women. We’ve had enormous success in England and I think it’ll be a fantastic success here in Victoria too!”

Rechter said she had been overwhelmed by the number of Victorian women wanting to share their stories of how sport and exercise have improved their confidence, health and wellbeing.

Rechter concluded “we’ve listened to the stories of hundreds of Victorian women who’ve told us about what being active means to them and what they’ve had to overcome to do it,” she said.

In the UK, This Girl Can was credited with getting 250,000 women more active within a year of its launch, and Sport England's own estimates suggest that it helped persuade up to 3.9 million women to start exercising.

This Girl Can – Victoria is a three-year campaign focused on empowering Victorian women to enjoy being active without worrying about judgement, gender stereotypes or skill level.

Among the materials is a TV advert, showing women taking part in a range of activities typical to Victoria – including roller-derby, AFL and netball.

VicHealth is the first organisation in the world to licence the This Girl Can campaign.