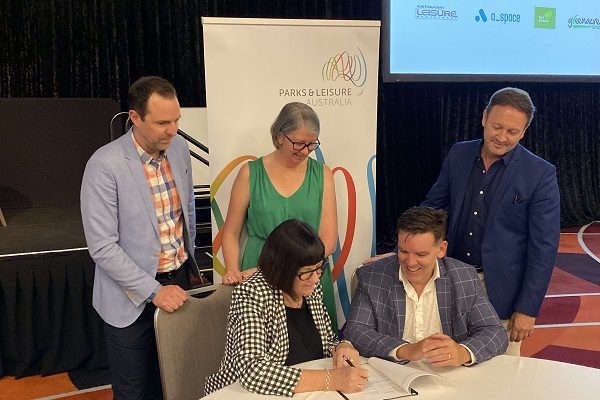 The final day of the 2019 Parks and Leisure Australia (PLA) National Conference in Perth has seen Sport Australia Chief Executive Kate Palmer and PLA President Paul Jane sign a partnership agreement that will, in the future, expand into a memorandum of understanding on the peak body and Federal agency’s shared areas of interest.

United by a goal to enhance community health and wellbeing through sport and physical activity, PLA Chief Executive Mark Band says the partnership’s objectives are focused on “recognising the role of local government in providing the facilities where lifetime habits of active recreation are established and where future elite athletes begin their sporting journey.”

Both organisations agree safe, accessible and modern infrastructure for sport and recreation is critical to encouraging more Australians to live active and healthy lifestyles.

Advising that Sport Australia's vision is to make Australia the world's most active sporting nation, Palmer says that goes hand-in-hand with providing suitable spaces and facilities, advising “developing safe and active spaces is a key priority for Sport Australia so we look forward to collaborating with Parks and Leisure Australia.

"The $100 million Move It Aus Community Sport Infrastructure program is an example of important investment in happier, healthier communities."

Commenting that sport and recreation spaces are fundamental and positively contribute to the development of liveable, active and engaged communities. Jane added "Australia is blessed with some wonderful spaces, including our natural outdoor resources, but we need to preserve and even enhance these if we want every Australian to enjoy the opportunity of an active, healthy lifestyle.

"Parks, reserves, sport and recreation facilities, pathways and public spaces are essential to any community. They are places for physical activity, relaxation and social interaction, contributing to the health and wellbeing of Australians."

A key feature of the partnership will be shared research, providing evidence for the planning and management of community sport infrastructure.

Palmer, who yesterday announced that she will be leaving her role, was a keynote speaker at the PLA National Conference where she had spoken of the need for a coming together of those involved with heath, parks, wellness and sport to deliver a more holistic approach to getting people active.

The Federal agency and PLA have had a longstanding relationship.