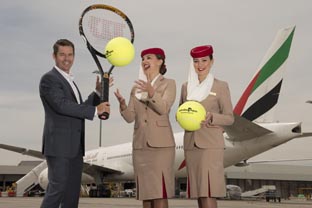 Tennis's reputation as a 'clean' sport is leading to a massive growth in sponsorship deals both internationally and in Australia.

While sports such as athletics, cycling and football have been mired in doping and corruption scandals in recent years, the Association of Tennis Professionals (ATP) has this year secured sponsorship deals worth US$160 million over the next five years.

The governing body of the men’s professional circuit has struck new deals with five sponsors in recent months, including a fresh agreement with the airline Emirates that ATP President Chris Kermode described as the biggest in the association’s history. The ATP has also signed new deals with Peugeot, Maui Jim Sunglasses, IT services group Infosys, and Chinese online video business Letv.

Kermode said that sponsors were attracted to tennis because controversies have engulfed other sports stating “people see (tennis) as a clean sport, it’s a great product with great athletes and I think tennis is in the best place it’s ever been.

“Many sports have had difficulties, most recently athletics and football. I think brands are thinking very carefully about which sports they want to associate with.”

Kermode added that the US$160 million of new revenue deals the tennis body has agreed “is the biggest amount of revenue in the shortest space of time that we’ve ever had”.

Emirates, which was already a backer of the ATP, is replacing Corona Extra, the beer brand owned by AB InBev, as a so-called Premier Partner of the World Tour.