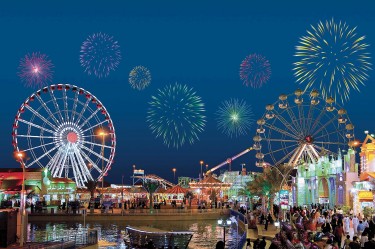 Dubai's annual Global Village opened on Saturday (5th October) with the first of more than 50 nights of fireworks illuminated the skies over the attraction.

Dubai's leading family entertainment and cultural attraction opened its 18th edition with a new funfair, the Fantasy Island, featuring 36 rides and skill games with instant rewards, the first ever in the Middle East.

Operated by Mellors Group Events, that has over 100 years of experience, including funfairs for the London Olympics, the Fantasy Island features themed wooden decking and delivers a classic Coney Island fairground atmosphere and environment that has never been seen before in the Middle East.

The specially themed children's entertainment program also features a number of unique attractions, including the Moshi Monster and Fairy Tales on Ice with Aladdin, Snow White and Pinocchio among other popular characters on the show.

Specially conceptualised children's shows by London-based Entertainment Company will happen twice a day six days a week throughout the season. The shows which started on Saturday will continue until March1, 2014.

Yesterday's opening of the Global Village saw the Lords of Lighting (Dreamscape) thrill show and Ernest the Magnito street show, which mesmerised the kids and families. During the next 148 days, this open theme park will bring 12,000 shows from all over the world. This year will also see the participation of Germany, Italy and France making the Global Village more global every year.

Global Village Executive Director of Operations Ahmed Hussain bin Essa explained "it means more than 65 countries will now be represented from every continent as its cultural reach and diversity continues to steadily grow."

A pavilion dedicated to Khalifa bin Zayed Al Nahyan Foundation is set up based on its vision of pioneering initiatives for welfare through supporting vocational projects in the UAE.

Aside from the pavilions displaying and selling unique and popular products of participating countries, visitors can also sample a colourful and truly international selection of handmade goods, artifacts and tasty cuisine from 170 kiosks inside the village.

For more information go to www.globalvillage.ae/