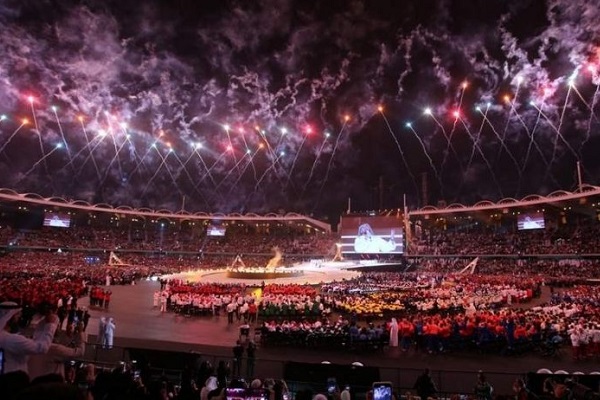 Thousands of athletes with intellectual disabilities from more than 190 nations have taken part in the opening ceremony of the 2019 Special Olympics World Games at the Zayed Sports City in Abu Dhabi.

Featuring performances from global superstars including Avril Lavigne the climax of last evening’s ceremony was the lighting of the Abu Dhabi World Games’ cauldron, completing the Flame of Hope torch run which began in Athens and has touched each Emirate across the UAE.

As tens of thousands of spectators looked on, Sheikh Mohamed bin Zayed, Crown Prince of Abu Dhabi and Deputy Supreme Commander of the UAE Armed Forces, declared the Games officially open, after which fireworks filled the sky at the climax of the event.

The first Games to be held in the Middle East, the hosts are aiming to challenge misconceptions, overcome prejudice and promote inclusion about the potential of those with intellectual disabilities as well as promoting the region’s event hosting capabilities.

Notably, the opening ceremony included a group of 25 Israeli athletes, the largest ever to represent Israel in an Arab country.

Israel was to march between Iran and Iraq but local security officials moved the team to march before Jamaica so that “the Israelis would feel safer,” according to media reports.

With just over half of the athletes at the World Games being women, gender milestones at the event are seeing Saudi Arabia bringing female competitors to the Games for the first time while Mauritiania has sent its first female athlete outside of the country to compete in a sporting event.

The UAE’s hosting of the Games is seen as a way of changing local attitudes to intellectual disabilities.

A recent study carried out by the Special Olympics in eight Middle Eastern countries found that while compassion for those with intellectual disabilities was evident, discomfort often prevents many people from interacting with them.

To counter this, the organisers of the Abu Dhabi World Games have called on the public to compete alongside disabled athletes in sports such as football, volleyball and basketball.

In addition, in a first for the Games, a dedicated team has been set up to create a lasting legacy with the introduction of 31 programs, covering health, education, culture and spreading awareness, aimed at improving the lives of those with disabilities in the UAE and challenge misconceptions and stereotypes.