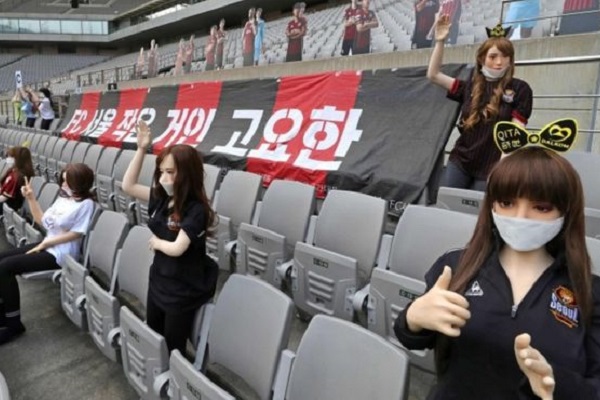 Officials from South Korean football club FC Seoul have apologised for using sex dolls to simulate the presence of fans at their otherwise empty stadium during a K League club match on Sunday.

With the K-League having commenced in fanless stadiums after the season started on 8th May, the sex dolls, which club officials insisted were "premium mannequins" were being used suggest the presence of fans during their game against Gwangju FC.

The club suffered further embarrassment with some of the figures holding signs advertising X-rated websites - despite pornography being banned in South Korea.

With FC Seoul advising that the sex dolls were used following a “misunderstanding” with their mannequin supplier, a company called Dalcom, while Dalcom told the BBC they had apologised to FC Seoul.

FC Seoul insisted that the figures were "premium mannequins" rather than sex dolls - but did admit Dalcom produces sex toys.

The “misunderstanding” followed Dalcom offering to fill some of the empty seats in the venue, and the club agreeing.

In total, there were 30 mannequins - 28 of them female, and two of them male.

During the game, fans watching the game broadcast noticed that some of the mannequins looked more like sex dolls - and some were advertising X-rated websites - leading to the club apologising on Instagram and Facebook.

FC Seoul official Lee Ji-hoon told the BBC it didn't do a background check on Dalcom, and didn't realise they worked in the sex industry.

Lee admitted he thought the dolls looked "very human" - but said it didn't even enter his mind that they could be sex toys.

Lee went on to advise “we would like to apologise … to everyone who loves and supports FC Seoul.

“We will be holding further discussions on how we can review potential problems in similar matters. We will put forth our due diligence to prevent such issues in the future.”