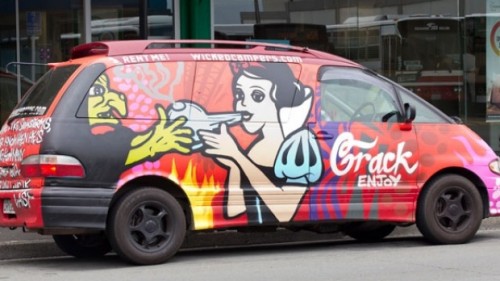 The Kaiteriteri Recreation Reserve, a popular camping spot in the Nelson region, has banned Wicked Campers from their site, saying the messages on the vehicles are inappropriate for the families who stay there.

The company has faced increased scrutiny lately over its trademark offensive slogans painted on the back of the campervans.

Wicked Campers, which operates out of Auckland, Christchurch and Queenstown as well as in Australia, has brash slogans and evocative imagery across its cars and vans, some with sexualised, illicit drug or violent messages.

New Zealand Prime Minister John Key has previously stated that the phrases are "beyond edgy and downright offensive".

Kaiteriteri Recreation Reserve Chief Executive David Ross believes the only way to affect change is to put policies in force on the frontline.

Ross explains that the reserve has "always been unhappy" with the phrases on the vans, which have previously been described as sexist, misogynist and derogatory. 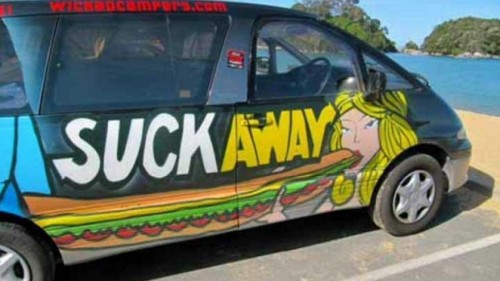 With a new move to crack down on the company, Ross says they are keen to "try and push it along".

As a result no Wicked Camper vans will be allowed on to the Kaiteriteri Recreation Reserve site.

With a handful of campers already turned away, Ross told local media “clearly we feel the branding on these Wicked Camper vans is inappropriate. It's not the kind of messaging we want inside our facilities.

"We have a lot of kids, families, a lot of tourists and local folk as well, so it's not something we want to be seen as supporting. Ultimately if we let these vans in here, it's a tacit approval of their branding and that's not something I want to engage in."

Ross says he doesn't want to be the one to explain to visitors why they'd allowed the vehicles to park up "or even explain to younger children what it means because they might park up next to a family."

Ross adds that he isn't on a "moral crusade" but highlight that allowing the vehicles in would be "inappropriate from a business perspective" and for the kinds of people who normally stay.

New Zealand Associate Tourism Minister Paula Bennett says she's "determined to do something about it" also suggesting that the chief censor involved. 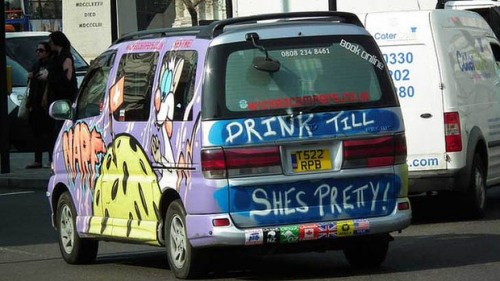 If the slogans were ruled obscene, drivers could be fined up to $15,000 or even jailed.

The DoC has removed the company from a list of rental operators on its website where travellers can purchase campsite passes.

Police acknowledge it was a complex issue from a law enforcement perspective with a spokesperson explain “a message may be widely regarded as offensive and inappropriate, but this does not necessarily make it a criminal matter.”

Meanwhile, Wicked Campers continue to enjoy their notoriety and the publicity.

Images: Wicked Campers' slogans have caused offence in both New Zealand and Australia.