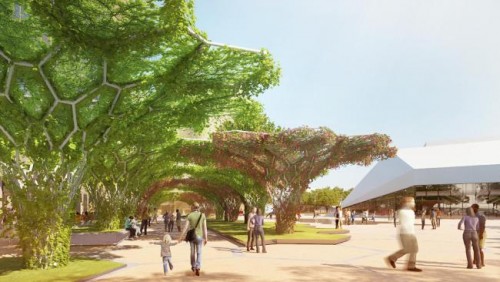 The South Australia Government has revealed details of its plan to redevelop the Adelaide Festival Plaza into a thriving riverbank hub and public event space in the city.

The proposed new plaza – designed by ARM Architecture and Taylor Cullity Lethlean – will cover 26,000 metre² of public space and be focused around a new Art Space Plaza and central garden. A tree-lined avenue will link this space with the city and a new promenade featuring cafes, restaurants, performing arts space and a public square centred around a water feature.

The South Australian Government is now inviting public comment on plans to create a space that it says will become Adelaide’s “pre-eminent public meeting place”.

In a statement, the South Australia Government’s development agency Renewal SA explained “the plaza will become a place in which people will want to stop and spend time.

“Visitors will be able to relax in a central garden as they wait for a performance to begin, enjoy a bite to eat from the adjacent café facilities, or experience activities in this space.

“The plaza will offer a different experience every time by celebrating the seasons and it will be brought to life by a balance of curated and spontaneous activities. It will be a memorable and distinctive place that embodies a unique account of the people, cultural life and character of Adelaide, combining relaxed sophistication with creative endeavour.”

Adelaide Festival Centre Chief Executive Douglas Gautier said he was “particularly excited” about the development’s planed ‘Walk of Fame. which would celebrate the Festival Centre’s rich performing arts history and draw visitors to the area.

Gautier stated “among the first steps will be the development of the north face of the Festival Centre, including new entrances and a ‘Walk of Fame’ disability access pathway.

“On the plaza side, the redevelopment will deliver seamless access from the new carpark and the plaza straight into renewed modern foyers with new bars, toilets and patron amenities.”

The South Australian Government has committed $180 million towards revitalising Adelaide Festival Plaza, supported by a $430 million contribution from property developer the Walker Corporation.

The upgrade was first announced in 2013 as one element of the ongoing redevelopment of Adelaide’s Riverbank Precinct.

Transformation of the area has also seen Adelaide Casino lodge a development application for its $300 million expansion.

Comments on the proposal can be made at www.dac.sa.gov.au/publications#development and must be received by Thursday 4th February.