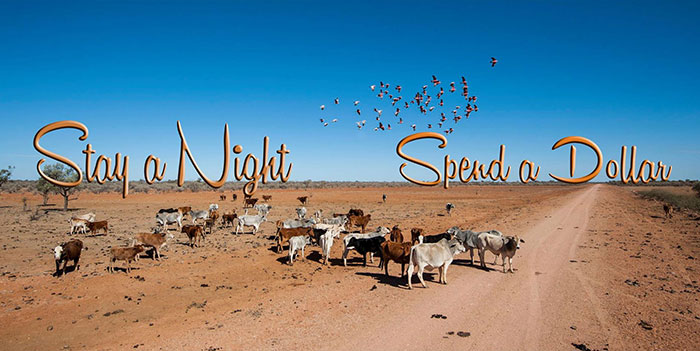 The image has been viewed tens of thousands of times and shared on social media.

Scott told the ABC that she wanted to aid drought-stricken communities, stating "there have been statistics of some businesses saying they would have to shut in the next month if business doesn't improve.

"But ... I think tourists are looking to help drought-affected towns too.

"(Visitors) still want to come out and have a look (and) if everyone thinks like that, then you can feel like you are personally helping out small businesses."

Scott said she had had some grey nomads in her shop, who said they saw the social media post and decided to buy refreshments out, rather than stay in their caravan.

She said there was also a group working to see whether billboards could be erected in the region with the same message, adding "if we could get communities, maybe local government taking it on board, and maybe putting up these billboards as you come in to a town from different angles, so that people could actually see, 'okay, well if we stay a night here and spend a dollar, we are actually personally helping the people affected by the drought'."

The Outback Queensland Tourism Association (OQTA) said it supported any measures to get visitors out west, and that all of the region's natural and man-made attractions were in full swing despite the drought conditions.

OQTA General Manager Peter Homan said data had shown those who travelled to the region had been spending less, but that could be tied up with the mining downturn and work visitors.

Homan stated “fgures that we get from the National Visitor Survey indicate about 400,000 visitors a year to the outback, with a spend of around $250 million on average.

"The numbers are up slightly, but the overall expenditure over about the last three years -that is down about 6%.

"We do pick up a lot of the mining (areas) and it has gone down significantly."