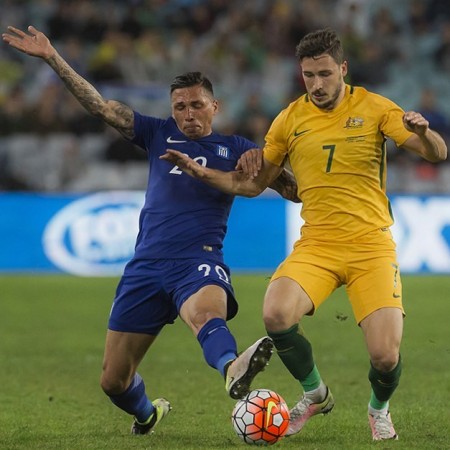 Australia coach Ange Postecoglou conceded he was "embarrassed" by the condition of the ANZ Stadium pitch during the Socceroos match against Greece last night (Saturday).

The game, which went ahead after a late inspection of the playing surface after heavy rain in Sydney, was settled by substitute Mathew Leckie's stoppage-time strike.

Postecoglou's post-match comments were dominated by a damning assessment of the pitch.

"We're hosting an international country, we're supposed to be the sporting nation of the world, the crowd were fantastic, I felt sorry for them. And we dish up that and I'm embarrassed. It's just not good enough.

"We're representing our country. That's being beamed to Europe.

"I can tell you what the Greek players were saying coming off the pitch and they're too polite to say it publicly.

"I'm embarrassed as coach of our national team that is what we dish up. We have world-class venues, I agree absolutely. World-class atmospheres. Our supporters are second to none. We love our sport.

"But in our game and our game alone, the pitch is actually an essential part of the spectacle. If that's not then we're cheating them.

"And above all, as a host, I'm embarrassed."

The Professional Footballers Australia (PFA) has backed Postecoglou's concerns with PFA Chairman Craig Foster said Australian football must demand better and praised the professionalism of the Socceroos in difficult conditions.

Foster stated “in what were extremely trying conditions, the Socceroos’ commitment and dedication to their footballing philosophy was remarkable, as was the quality of their play, and should be applauded by all.

“Both the Matildas and the Socceroos play ‘world class’ football and the playing surfaces afforded to them must meet this standard. On far too many occasions this has not been the case.

“Excuses should no longer be accepted; the game has moved past this. Sub-standard pitches risk player health and safety, make it impossible for players to be at their best and deny fans the chance to see a match of the highest possible standard.

“The players and coaches are fulfilling their end of the bargain and now the officials and Government must support the rapid progress of the standards within Australia’s fastest growing sport. For this reason, the PFA has implemented a pitch rating system in the A-League and W-League in recent years to encourage focus on one of the most fundamental aspects of football excellence.

“Every match the Socceroos and Matildas play is an opportunity to further demonstrate to the Australian public the progress the game is making and engage a new generation of fans.This must not be put at risk by poor quality playing surfaces.”

An ANZ Stadium spokesman said extreme weather conditions had made it difficult for the grounds team to carry out planned preparation for the football friendly after the State of Origin match on Wednesday night.

The spokesman stressed that almost 50mm of rain fell at ANZ Stadium in the 24 hours before the game, highlighting that grounds staff had just a two-hour window on Saturday to mow and aerate the turf and to get line markings down.

In total, 262mm of rain has fallen in Western Sydney over the weekend Friday as one of the worst storms in recent memory hit eastern NSW.

The spokesman explained “pitch preparation was significantly hampered by the wet weather.

“We have had a lot of rain in Sydney in a short period of time and extreme conditions such as we’ve experienced present significant challenges for the grounds team, especially at the height of winter,” the spokesman said.

A crowd of 38,682 attended Saturday night’s football friendly, following 80,251 fans at the opening State of Origin match, meaning 118,933 spectators passed through the turnstiles at ANZ Stadium in four days.

Postecoglou will hope for better conditions when the two sides meet again at Melbourne's Etihad Stadium on Tuesday.