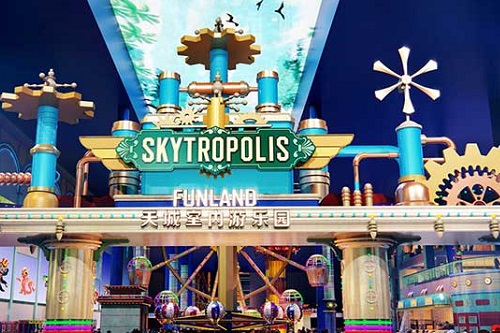 Resorts World Genting in Malaysia’s Highlands has opened the ‘Skytropolis Funland’ indoor theme park featuring 13 rides, with nine more to be added prior to its full opening in April.

The family entertainment attraction, revamped at a cost of RM300 million (U$$72.5 million), includes Asia’s first hyper reality centre The VOID as well as the BigTop Video Games Park. Soon, the park will introduce the Imaginatrix – a VR area combining physical rides with virtual reality (VR).

Introducing the new attraction Brian Machamer, Senior Vice President of Theme Parks for Resorts World Genting, stated “we are always striving to excite and impress our guests with new experiences at the resort, and with Skytropolis Funland, we have succeeded in creating a carnival wonderland that can be enjoyed at any time of the year by children, adults and families alike.

The SkyTropolis Indoor Theme Park was set to open alongside Twentieth Century Fox World  at the resort - but the future of the theme park are now on hold after numerous delays which caused Fox to withdraw from the deal.

With Genting Malaysia Berhad having last year taken legal action against Fox, 20th Century Fox has filed a countersuit in its ongoing legal battle over the theme park.

The deal in question centered on a 2013 licensing pact that gave Genting rights to certain Fox intellectual property - including Planet of the Apes, Independence Day, Ice Age, Alien and Predator -for use in the park to be located at Resorts World Genting casino resort in Genting Highlands, Malaysia.

After the original filing in the U.S. District Court in California, a Fox spokesperson called the suit “entirely without merit,” saying Genting has been the one failing to meet agreed-upon deadlines for years.

Filed this week in California, the counterclaim detailed numerous instances where Genting did not adhere to its obligations.

Fox’s filing cites breach of contract, breach of the covenant of good faith and fair deadline, and a demand for a jury trial.

It advises “Genting’s failure to ‘soft open’ the Park by June 2018 gave Fox the right to terminate the agreement without regard to whether Genting was at fault.

“The fault for these failures lies with Genting, and Genting alone,” it adds, detailing the progress of the parks’ development.

“Genting’s failures to adhere to its obligations and deliver on the agreed-upon schedule resulted from a mixture of Genting’s incompetence, inexperience, and rank indifference to its contractual obligations.”

Disney was part of the original lawsuit as it is nearing completion of its US$71.3 billion deal to acquire much of 21st Century Fox’s film and television business.