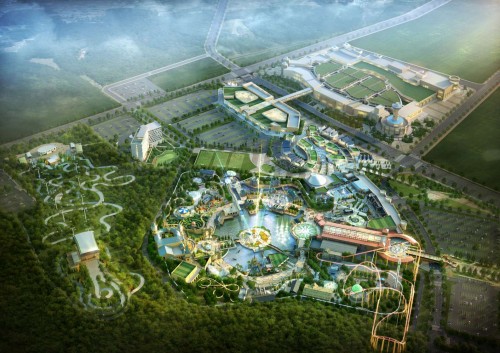 New Zealand tourism company Skyline Enterprises is to develop its second Luge in South Korea in as many years.

Skyline has today announced that it will spend an estimated $22 million on establishing Skyline Luge Busan as part of a large-scale, US$333m theme park, hotel and shopping complex development under construction called Osiria Thema Park near Busan City.

Skyline Luge Busan will consist of four tracks, each approximately 900 metres long, and have two chairlifts to carry approximately 2600 riders per hour – the highest capacity of all Skyline’s Luge sites throughout the world. Skyline is predicting to see 900,000 rides being completed in its first year of operation.

Skyline Enterprises Executive Chairman Mark Quickfall commented “we are honoured to be invited to include our Luge attraction in this exciting development.

“The Luge has proven to be very popular in South Korea so far, so investing in further sites there is a logical decision. It’s also great to be able to take this homegrown, Kiwi attraction to more people internationally.”

The site will begin to be prepared in September this year, with construction of the Luge tracks and facilities beginning in August 2018. Skyline expects to have the Luge complete in 2019.

The Busan project is expected to be as much of a success as Skyline Luge Tongyeong, a $20 million project that opened to the public in February this year. That project - at that time the largest direct capital investment in South Korea by a New Zealand company - has exceeded Skyline’s expectations for visitor numbers, with more than 200,000 rides being completed on the Luge in the first two months.

Busan is the second-largest city in Korea with a population of more than 3.6 million and receives 7.1 million visitors each year.

Quickfall adds “Luge is a unique attraction with broad appeal as each rider controls their own experience. Korean visitors to New Zealand have been enjoying our Luge sites in Rotorua and Queenstown for many years, so taking it to their home market is an exciting development for Skyline.”

Skyline has been operating the Luge since 1985 in New Zealand. With sites operating in New Zealand (Queenstown and Rotorua), Canada, Singapore and Tongyeong, Busan is Skyline’s seventh site.