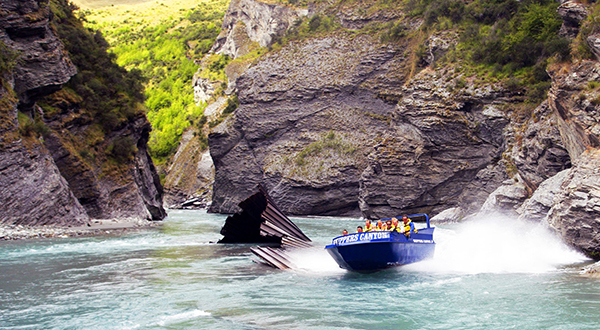 New Zealand’s Queenstown District Court has fined Skippers Canyon Jet Ltd $50,000 and ordered the company to pay $260,000 in reparations for a jet boat crash in 2019 that injured 10 people who had to be evacuated by Helicopter.

Maritime New Zealand took the prosecution against Skippers Canyon Jet Ltd under the Health and Safety at Work Act (2015) for failing to ensure the health and safety of the jet boat’s passengers and crew. Maritime NZ took the action to ensure the industry is aware of this issue to prevent further accidents of this type occurring.

A statement released by Maritime NZ advises “the crash report released by the Transport Accident Investigation Commission earlier this year outlined that around 10 am on 22nd February 2019, the company’s jet boat Discovery II hit a canyon wall on the Shotover River following steering failure.

“Just prior to the crash, the Discovery II’s skipper made a left-hand turn while passing Skipper’s Bridge and was preparing to zig-zag through a sharp double bend when he discovered the jet boat’s steering had locked.

“Realising the impact was inevitable, he yelled ‘brace’ and the jet boat collided with the canyon wall at approximately 20-30 kilometres an hour, throwing one passenger into the water. The time between steering failure and collision was five seconds.

“The skipper made a mayday call, pulled the passenger thrown into the water back on board, beached the boat and started administering first aid to the passengers.

“The skipper and passengers were all injured in the crash. They sustained varying degrees of injuries, from bruising and lacerations to joint dislocation and broken bones. As well as the physical injuries many passengers experienced ongoing psychological impacts, including difficulty sleeping, anxiety, and other emotional effects from their injuries.

“The passenger thrown from the boat received the most-serious injuries, with the impact fracturing her knee, which required reconstructive surgery and months of rehabilitation.”

Maritime NZ Investigations Manager Tracy Phillips said this case clearly shows the risks to staff and passengers when maintenance is not done in accordance with the manufacturer’s recommendations.

Phillips notes “this is a preventable accident which was caused by incorrectly torqueing the nuts holding together components of the jet unit. The use of a spanner instead of the recommended torque wrench, resulted in complete steering failure.

“What is concerning is expert analysis indicated the studs on the board could have been fatiguing for months.

“The collision risked the lives of all on board and despite the best efforts of the jet boat driver, they were unable to control the vessel in the final seconds.

Phillips adds “this inadequate jet boat maintenance has had a massive impact on the lives of the people who were in this crash which is why Maritime NZ took the action to ensure the industry is aware of this issue to prevent further accidents of this type occurring.”

“Skippers Canyon Jet Ltd has the ultimate responsibility for maintaining its boat to keep passengers and staff safe.”

The crash investigation prompted Maritime NZ to issue a safety notice to commercial jet boat operators and vessel surveyors in November 2020, to raise awareness of the potential risk of failure of studs that hold the steering nozzle housing in place and make recommendations to address the risk.

Maritime NZ advise that upon sentencing, Judge Russell was clear in court that the failure to use a torque wrench was a bad error. He said that with any adventure tourism, paying customers will expect some risk, but are entitled to assume that the equipment is maintained properly.

Judge Russell accepted Maritime NZ’s submission that the risk of jet boating on this river is high and inherently dangerous as the boat is travelling at speed in a winding narrow passage. The Judge said that the risks of failure of equipment are serious, but it is an activity that can be done safely.

The safety update regarding jet boats with systems that use studs to hold steering nozzle housing in place is available here: