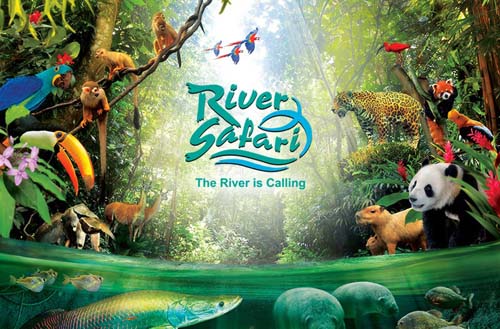 Since its soft opening in April last year, Singapore's River Safari has attracted more than 1.1 million visitors from all over the world.

The 12-hectare attraction offers visitors a wildlife adventure inspired by the world's major rivers, including the Amazon, Ganges, Mekong, Nile and Yangtze rivers.

Built at a cost of $160 million, Asia's first and only river-themed wildlife park, houses 6,000 animal exhibits, including the giant river otter and resident giant pandas, Kai Kai and Jia Jia.

Prime Minister Lee said that it has taken years of hard work and investments to grow Singapore's attractiveness as a key tourist destination and that upgrades and enhancements must continue in order to attract visitors who are becoming increasingly spoilt for choice.

He added that "workers must deliver higher quality service to meet higher expectations."

To back this, the Singapore Government has set aside almost $1 billion in a Tourism Development Fund to help fund new tourism concepts among other initiatives.

Wildlife Reserves Singapore (WRS) Chair Claire Chiang agreed, stating that the attraction will enhance the service skill set of its staff so that they can offer visitors better hospitality.

Chiang also explained that WRS is also looking to add more species of wildlife to enhance their collection, stating "we are all waiting anxiously and we are hoping for good news maybe in the next two years."

Chiang added "the park has been well-received since we opened the Giant Panda Forest in November 2012", concluding that visitors are "curious" about the world of river habitats.

For more information go to www.riversafari.com.sg/