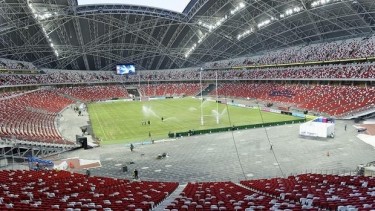 Sports Hub Pte Ltd (SHPL) is reported to be ready to replace the hybrid grass pitch in the new Singapore National Stadium with a new artificial turf playing surface.

The change comes after months of controversy over the state of the Stadium’s playing surface during which time the S$1.5 million has been spent on new lighting equipment to try to improve the quality of the pitch.

The S$833,000 Desso GrassMaster pitch (a hybrid of synthetic and natural grass pitch that has been successfully used at Wembley and Emirates Stadiums in London and Dunedin’s Forsyth Barr Stadium) has failed to grow as expected since being unveiled in May. As a result the surface has been criticised and events have been cancelled.

In response to the complains, Greg Gillin, Senior Director of Stadia at the Singapore Sports Hub had suggested in November that a “micro-climate within the stadium” had been a factor, where “some part of the pitch that gets eight or nine hours, and some parts that only get an hour’s worth of sunlight.”

In October, the New Zealand Rugby Union cancelled the match between the rugby teams, Maori All Blacks and Asia-Pacific Barbarians due to the poor quality of the pitch that has drawn numerous complaints from sporting teams.

While ASEAN Football Federation Suzuki Cup 2014 went ahead despite early possibility of scraping the event at the National Stadium due to the condition of the pitch, sandy patches were still visible on the field during the tournament.

The role of Gillin, who resigned from his role at the beginning of December, has been questioned by local media. Shortly after joining SHPL to oversee the pitch installation at the new Stadium, Gillin also took on the role of pitch consultant for the Indian Super League (ISL) apparently making “around 120 visits to the eight (ISL) venues to ensure that they met international standards".

In an interview with Singapore newspaper Today, SHPL Chief Operating Officer Oon Jin Teik stated “we are exploring several pitch solutions that can cater to our multipurpose sports and entertainment calendar at the National Stadium. More details will be released at a later date.”

When the hybrid grass pitch was first announced to be used in the National Stadium, SHPL said that its durability and versatility means long-term cost savings.