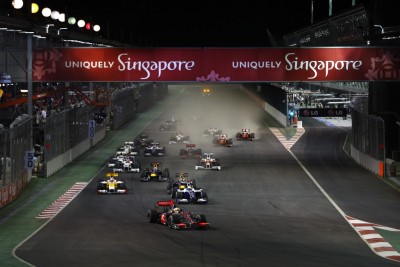 Singapore's Formula One Grand Prix will remain on the motor racing calendar for the next five years after a new deal between the Singapore Government and F1 organisers that will see the Government bear responsibility for 60% of the S$150 million (US$122.61 million) cost of staging the race.

The Singapore Grand Prix made its debut in 2008 as F1's first night-race, but the weekend's event, won by Red Bull Racing's Sebastian Vettel, was the last of its initial five-year deal. There had been question marks over the future of the hugely-popular event ahead of the new deal.

The Singapore Government had been eager to reduce costs with local organiser Singapore GP (SGP) having stated that any new deal would have to offer "commercial viability."

As a result, the Grand Prix was one of four races marked "subject to confirmation" on a provisional Formula One calendar for 2013.

Over the weekend Singapore's Second Minister for Trade and Industry, S. Iswaran stated that the differences had been resolved, telling Reuters "the negotiations have taken some time because all parties have had very specific objectives and wanted to arrive at a mutually beneficial outcome."

Iswaran said the race had attracted more than 150,000 international visitors over the last four years with an average annual tourism spend of S$140-150 million.

He added "the Singapore government in particular has taken a very deliberate study of the costs and benefits of continuing with this race from a national perspective.

"Our view is that F1 has been good for Singapore. We had estimated $150 million a year to run the race and the government would share 60% of the approved costs. We have been able to manage it slightly below that and going forward we think there will be additional scope for savings."