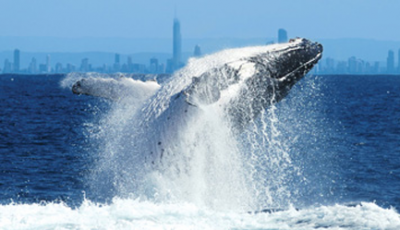 Growing numbers of sightseeing boats are endangering both themselves and the safety of the whales they are watching during the current migration season.

Sea World Director of Marine Sciences Trevor Long says Gold Coast boaties are putting themselves in physical danger by getting too close to whales referring to some "near-misses" during the current migration, with vessels getting too close.

Long told the ABC that boaties should not go within 100 metres of whales, or 300 metres if there are more than three vessels in the area.

He stated "whese whale numbers are going to increase and increase quite a lot like this year.

"The babies are very inexperienced - they don't understand boats, mums are very, very protective of their young.

"They will do anything to protect their young."

Long says boaties really do not know where the whales will surface if they get too close, adding "these animals move at around about three to four knots.

"(Boaties) try and calculate where that whale will come up for its next breath and they want to be there as close as they can.

"They don't understand that that whale once it makes its choice, it's got to take that line so they could be right underneath that, so there's a lot of dangers."

NSW National Parks and Wildlife Service Coordinator of Marine Fauna Programs Geoff Ross recently stated "sheltered bays and inlets were traditional calving areas for right whales and we are starting to see them return home after whaling pushed them to the brink of extinction.

"With infrastructure, people and large numbers of commercial and recreation vessels making the formerly quiet bays and inlets of the NSW coast now very busy, we need to get the message out there that the whales are very special and people really need to give them their space and share the water. This species loves the shallow water, is hard to see and they travel slowly making them more vulnerable to vessel strike and entanglement.

"Watching the whales from the shoreline is often the best for everyone, safer for you and less chance of stress for an expectant whale. In particular from many of the NSW national parks which provide scenic headlands from which to view them."