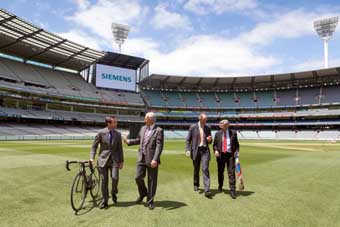 Energy efficiency upgrades will confirm the Melbourne Cricket Ground’s (MCG) standing as one of the most environmentally sustainable stadia in the world – and save enough electricity to power the light towers for nearly six years.

The Melbourne Cricket Club (MCC), working in tandem with Siemens, is close to finishing a project that will deliver a host of significant environmental savings.

Once completed, the program of works, which commenced in May, will result in the MCG generating enough energy savings annually to power 835 houses.

Siemens ambassador and sustainability advocate Cadel Evans has this week inspected the upgrades and, having riden his bike around the perimeter of the venue, stated “as a long time advocate of the environment, it’s really heartening to see the MCG – Australia’s spiritual home of sport – take such a significant step.

“As an athlete I welcome the chance to play a role in creating awareness around environmental and sustainability issues.

“The work the MCC and Siemens have undertaken has enhanced the MCG’s reputation not only as a sporting showcase but also as a beacon for energy and environmental efficiency.”

Investing more than $8 million in the project, the MCC is expecting savings from the reduced energy consumption over the next five to 10 years will offset the cost.

Examples of the work involved include:

Roland Busch, member of the Siemens AG Managing Board and responsible for Asia/Australia, took time to see first-hand the upgrades at Australia’s favourite sporting stadium as part of his visit to Australia.

Commmenting on the work, Busch stated “I have been fortunate enough to visit some of the great sporting stadia around the world (and) it’s clear to me now that the MCG truly ranks as one of the greatest arenas on the planet.

“The MCG is part of the heart and soul of Melbourne and Siemens is proud to be involved in the environmental upgrade that has ensured the sustainable future of such a wonderful sporting arena.”

Explaining the MCC’s commitment to sustainability, Club Chief Executive Stephen Gough added “(our) commitment follows other recent MCC environmental initiatives, including the Yarra Park restoration project and water recycling facility, which has seen the MCG save more than 240 million litres of water since it was implemented two years ago.

“The savings that this project delivers means it will pay for itself. It truly represents the ultimate in sustainable efficiency. It was terrific to work with Siemens’ engineers to ensure the MCG remains a world-class and environmentally responsible stadium.”

The project benefits include:

Energy saved each year by the upgrades will:

C02 saved each year by the upgrades would: