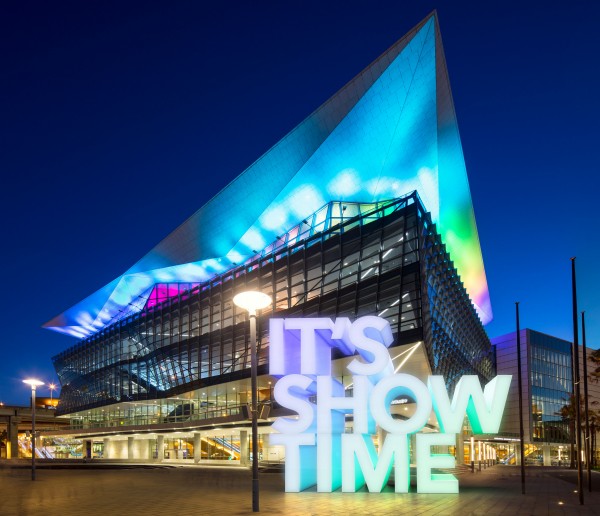 With the curtain set to rise on one of the world’s most hotly anticipated venues, the International Convention Centre Sydney (ICC Sydney) has launched its opening marketing campaign – ‘It’s Showtime’ – overnight, at international business events trade show, IBTM World, in Barcelona.

Cheers have already resounded throughout the centre’s sparkling new venues as its management team, AEG Ogden, recently executed a full dress rehearsal of 30 events to test the venue, its operations and its people ahead of a December opening.

The stage is now set for delegates, exhibitors, keynote speakers, performers and guests to take their place in the world class facilities, which include five star convention and exhibition centres, 8,000 metre² of meeting room space, 35,000 metre² of exhibition space and 5,000 metre² open air event deck. Australia’s largest Grand Ballroom and three impressive tiered theatres, including the 8,000 seat ICC Sydney Theatre, will also be on show.

As the doors open and Sydney’s business events landscape is transformed, Geoff Donaghy, Chief Executive of ICC Sydney, said the $1.5 billion destination will deliver a paradigm shift in the events industry, and that It’s Showtime - a multi-platform marketing campaign that uses theatrical pizazz to showcase Australia’s premier exhibition, convention and entertainment venue - brings this to life.

Donaghy explained “the stage is set, the dress rehearsals have been applauded, and we are ready to dazzle.

“We know that ICC Sydney will fundamentally change the way events are experienced in Sydney, and are committed to ensuring that every event is a show to remember.

“This promise has already allowed us to secure more than 400 bookings, ahead of our opening, and we can’t wait to deliver on our spectacular potential.

“ICC Sydney is a flexible and fully-integrated precinct, offering industry leading technology, professional service and a year-round calendar of dynamic business and entertainment events, all in one place.

“It will draw the biggest corporate and consumer events from around the globe to our city, from the World Congress of Accountants and OpenStack Summit, to Amway China and International Bar Association.”

NSW Minister for Trade, Tourism and Major Events, Stuart Ayres, said that ICC Sydney’s opening will shine a spotlight on Sydney and market NSW’s capabilities to deliver major infrastructure to the world, adding “ICC Sydney is an important component of the State’s suite of infrastructure projects. It will generate at least $5 billion in economic benefit for New South Wales over 25 years, ensuring that Sydney retains its prime spot on the international stage.

“This incredible venue adds to the remarkable natural beauty and entrepreneurial spirit of Sydney. We truly have a convention, exhibition and entertainment venue that is worthy of our city’s talents and will attract business ideas and innovation from around the globe.”

ICC Sydney is already operating to a new industry benchmark and can cater to every event type and request.