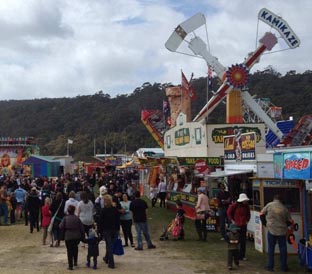 Carnival rides in Tasmania will be strictly audited through the Tasmanian show season in the wake of the death of an eight-year-old girl died at the Royal Adelaide Show last month.

The assurance was made by the Showman's Guild of Tasmania in advance of the recent Burnie Show.

The Burnie Show, the first of the spring season and the first show to be held in Tasmania since the Adelaide fatality had not been planning to feature the Airmaxx 360 ride or the Traffic Jam ride, which was later shutdown by show organisers for not enforcing height restrictions for children.

Alexander said rides in Tasmania were subject to a strict safety regime and were regularly inspected by WorkSafe, telling the ABC that all rides "will be audited and inspected by workplace standards, that involves them going through all logbooks, all records of inspection.

"All equipment has to be inspected every 12 months by an authorised plant inspector to certify that they are safe.

"So one piece of equipment may be audited several times in the next couple of months."

The Burnie Show is a two-day annual show running on the Friday and first Saturday of October.

The Show, which is held at the Wivenhoe Showground, has run for over 100 years. Originally known as Grand Spring Show it survived through the world wars and the Great Depression and now attracts over 12,000 visitors a year.