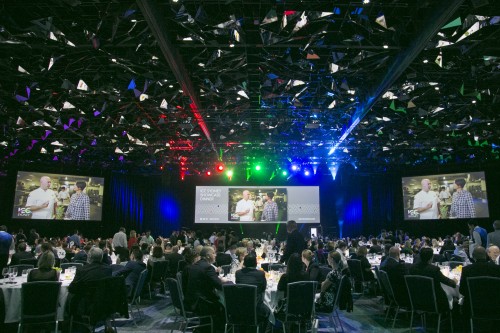 The International Convention Centre Sydney (ICC Sydney) wowed leaders from across Sydney’s business, entertainment, media, academic and events communities last night, showcasing its world class capabilities with an exclusive Showcase Dinner within the dazzling Grand Ballroom – the largest of its kind in Australia.

The spectacular event was the latest in a calendar of 30 ‘test events’ designed to put every facet of the building through its paces prior to its launch in December, including the state-of-the-art kitchens which are the largest in the Southern Hemisphere.

More than 800 guests were invited in thanks for their support of the ICC Sydney team in its opening phase, including clients from the venue’s 400 confirmed events.

Performances from some of the nation’s top emerging musicians, courtesy of the Talent Development Project, and addresses from ICC Sydney leaders also helped highlight how the venue will create a paradigm shift in the way events are delivered in Sydney.

Commenting on the night, ICC Sydney Chief Executive Geoff Donaghy stated “the Showcase Dinner was a fantastic success and I would like to thank everyone who attended and congratulate all of the staff, performers and partners who made it possible.

“This is a crucial stride in ensuring our team and venue meets our industry leading benchmark ahead of ICC Sydney’s official launch this December.

“I am looking forward to seeing the precinct in full action and am pleased to say that we have an impressive array of secured events – from performances by international superstars like Keith Urban and PJ Harvey, to business events with the World Accountants Congress and International Bar Association.” 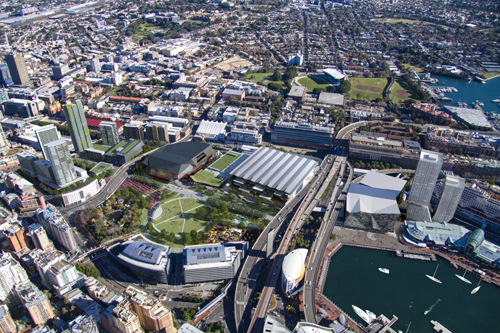 “The venue’s approach to food and beverage will help showcase amazing local produce too, and this is a fantastic way to shine a spotlight on what regional New South Wales has to offer.”

“The precinct will become a hub of activity and the flow on effect for the travel and tourism industry will be extremely positive.”

TV personality and Chef, Lyndey Milan explained “I am delighted to see an organisation as large as ICC Sydney sourcing local, sustainable produce and acknowledging the producers who work so hard to provide quality ingredients. It is a wonderful advertisement for Australia and our farmers.

“Moreover, it is fantastic to see someone like William Wilson, a graduate of the prestigious Court of Master Sommeliers, in charge of ICC Sydney’s Wine Collection as he is such a strong supporter of New South Wales and wider Australian wine.”

Images: Guests seated in the spectacular Grand Ballroom at ICC Sydney (top) and the new ICC Sydney from the air (below).