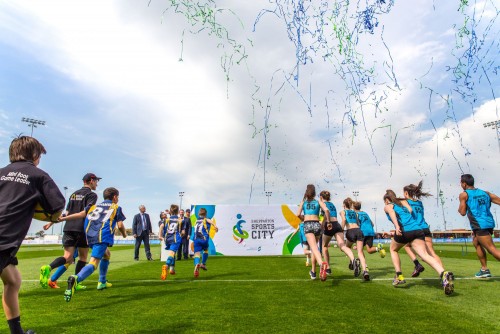 The celebration, which featured local politicians and dignitaries, took place at the Main Pavilion which involved local sporting groups taking to the field to showcase their sport, with Olympic and Commonwealth Games medallist John Steffensen and home-grown hockey royalty and Olympic gold medallist Louise Dobson discussing the value of regionally-based competition and sporting facilities.

The official opening yesterday (22nd September) included the unveiling of the name and brand of the site - Shepparton Sports City - with the identity representing the energy and celebration of all sport and competition for all people.

Greater Shepparton City Council Mayor Dinny Adem explained “Shepparton Sports City is a shining example of what can be achieved when the three tiers of government work together.

“Collectively we have funded the creation of an international standard sporting facility that will have a long lasting legacy not only for the Greater Shepparton community but the sports that call Sports City home.” 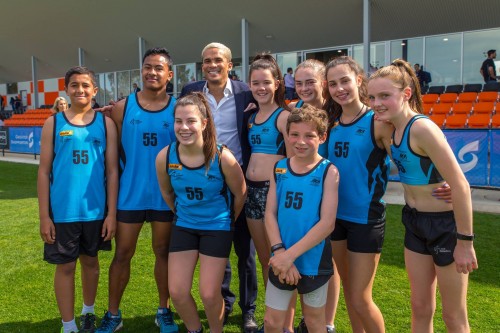 The opening celebration culminated with friendly football match between the A-league rivals Melbourne City and Western Sydney Wanderers occurring this evening at 7.30pm.

Mayor Adem added “this is a chance to showcase our fantastic state-of-the-art football facilities as well as an opportunity for our local soccer community to experience big time football on our doorstep.”

Yesterday also saw the announcement that the Little Athletics VIC Northern Country Track & Field Championships be staged at the Shepparton Sports City on 17th and 18th February next year.

The Little Athletics Championships will see approximately 600 competitors and officials stay for two days. The event is expected to attract an additional 2,000 visitors and create an economic benefit of approximately $733,000 to the region.

Images: The opening of the Shepparton Sports City (top) and ​John Steffensen at the oepning with a group of young athletes (below).