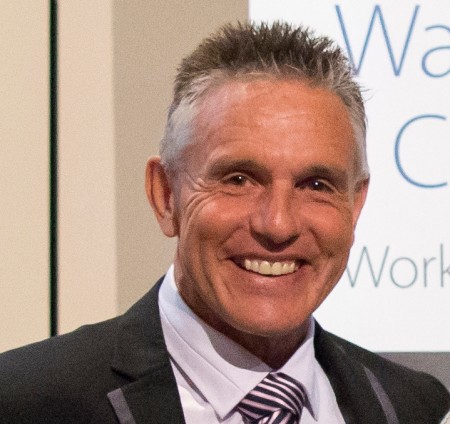 Jeff Fondacaro, President of the Leisure Institute of Western Australia (LIWA) Aquatics has been presented with a Commonwealth Service Award by the Royal Life Saving Society Australia (Western Australia Branch) for his contribution to life saving and water safety.

Presented in recognition for his service to the aquatics industry, the citation for the prestigious award read:

"Jeff Fondacaro has been on the RLSSAWA Board of Directors since 2001. Jeff has volunteered his time since 2000 where he participated in many volunteer committees and working groups to review RLSSAWA training packages. He has been instrumental in ensuring that these training programs are meeting the needs of the aquatics industry."

• Fondacaro has worked in the aquatics industry for 40 years and since 1988 in Western Australia;
• Fondacaro has been on the LIWA Aquatics Board since 1990 as a volunteer and was Treasurer for 10 years and President since 2007;
• His commitment to lifesaving has been demonstrated through the initial consultation and development of the RLSSA Pool Lifeguard Award in the early 1990s as a volunteer;
• He was involved with the initial development of the pre-cursor to Watch Around Water - Pool Watch at the Beatty Park Leisure Centre;
• He is a great advocate for Watch Around Water and promotes this program and the partnership with RLSS at every possible opportunity;
• Fondacaro has been involved in the delivery of vocational training for RLSSWA since 2000 and has played a major role in mentoring young staff in the area of pool lifeguarding and pool operations;
• Through Jeff's involvement, Beatty Park participate in regular in-house training for their lifeguards;
• He has played an ongoing role in the development and moderation of RLSS training programs since 2000.

In acknowledgement of his work, a statement from LIWA Aquatics read "wonderful recognition for a lifetime contribution to Water Safety - congratulations Jeff!"