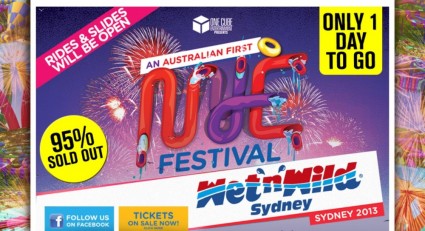 Cancellation of Wet'n'Wild Sydney's New Year's Eve event at short notice has been reported as being as a result of "major management failures and security oversights."

An investigation by Fairfax Media published in the Sydney Morning Herald yesterday (Sunday 12th January) reported that "far from falling victim to technical difficulties or public transport issues as previously claimed, the event at Wet'n'Wild (Sydney) was cancelled six hours before its starting time after the venue failed to provide an adequate crowd safety management plan to police."

With Village Roadshow, the owners and operators of the new waterpark, and event promoters One Cube set to begin legal action this, the Fairfax Media report continued "a senior NSW Police source confirmed a 'risk assessment' had identified 'deep concerns' about event staffing and security (prior to the New Year's Eve event).

"Fair Trading investigators were also assessing information on the Prospect theme park's security supervisor Brad Kisbee, who played a role in a tender process that last October saw a lucrative on site contract awarded to Unimet Security, a company with which he had been involved for several years."

In a separate development, ticketholders for the cancelled event are apparently set to have their tickets refunded with One Cube apparently having agreed to offer refunds to the 9,000 ticketholders.

Pressure on One Cube Entertainment from NSW Fair Trading as well as social media outrage appears to have been instrumental in getting the inexperienced promoters to do the right thing.

A message on the ticket providers website, Moshtix, says the event has been cancelled and ticketholders will receive an email "shortly" with refund details.

Minister Ayres added "we expect the promoters to provide full refunds to patrons who want one.

Ticketholders may also be entitled to refunds for travel and accommodation costs.