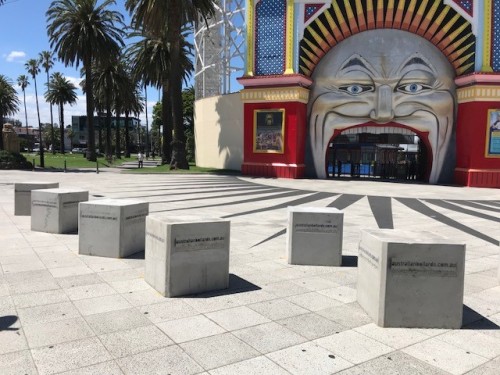 Landmark locations on the foreshore of the Melbourne beachside suburb of St Kilda, including Luna Park Melbourne and the Palais Theatre, are now being protected by concrete security bollards.

Installed before Christmas by the City of Port Phillip to enhance security in the wake of terror-related vehicle incidents in the Melbourne CBD, the temporary grey concrete bollards protect entrance and surrounding areas at the popular Melbourne landmarks.

Already in place in key locations in the Melbourne CBD as well as at the MCG, City of Port Phillip Mayor Bernadene Voss said the installations were “proactive and prudent” in enhancing public safety.

Mayor Voss advised “we have placed 40 temporary concrete bollards outside Luna Park and its surrounds.

"We have no immediate plans to place temporary bollards anywhere else right now, but we are continuously assessing our public spaces to ensure we better protect the public."

Mayor Voss emphasised that there is no specific threat to Port Phillip and no need for public alarm, explaining “risk assessments are conducted regularly by Council and other stakeholders, like Victoria Police, that inform these decisions."

The bollards located outside Luna Park will be covered to look like giant liquorice allsorts and decorated with circus and festive themes.

The supplier Australian Bollards has also suggested that its circular bollards, painted to look like giant tennis balls, could be used to protect the Australian Open at Melbourne Park.

For information click here to contact Australian Bollards via their entry in the Australasian Leisure Management Supplier Directory.