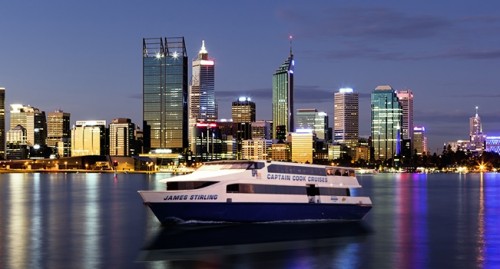 Sealink Travel Group announced yesterday (Wednesday 24th February) that it would be paying $12 million to acquire the family-owned Perth business, which employs more than 100 people.

The deal will see the owner of Captain Cook Cruises in Sydney Harbour add to its fleet of 69 vessels already operating in four States, and the Northern Territory.

Commenting on the acquisition, SeaLink Managing Director Jeff Ellison stated “we are delighted to expand our business footprint into WA, a State set for strong tourism expansion.

“We see significant upside with the opening in January of Elizabeth Quay. This development will reconnect the city and the Swan River, bringing public spaces, business opportunities and much needed accommodation to Perth.

“There is potential to provide marine transport to the new football stadium and the expanded casino and the ability to offer further commuter services in Perth.”

Captain Cook Cruises WA’s turnover in in the last financial year was $10 million, and the acquisition will be funded by existing undrawn bank facilities, Sealink explained.

Recent statistics show that Australia is the fastest growing cruise market in the world. The Cruise Lines International Association (CLIA) found that Australia experienced a 20.4% increase in cruise passengers in 2014, putting it six years ahead of its goal of reaching 1 million passengers by 2020.

According to the CLIA report, the South Pacific attracted more than 390,000 passengers in 2014, giving the region 39% of the Australian cruise market. However, river cruising was also in high demand with Australian travellers, with total passenger numbers growing by 62% to almost 80,000.