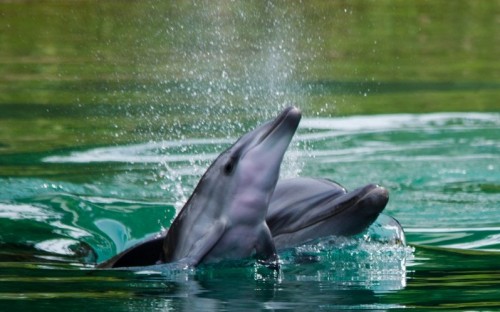 The calf, born on the 7th December, has been doing very well and is swimming strongly and suckling milk from his mother Jinx, who is a first time parent.

Sea World Marine Mammal Supervisor, Andy Mulville said it was wonderful to have a new dolphin calf and for a female dolphin to give birth and nurture their young is extremely enriching in these natural settings.

Mulville explained “Jinx is a first-time mother and she is doing a wonderful job of caring and nurturing for the young calf who is also the first male born at the park in nine years.

“He is a very energetic calf and has been starting to develop his personality as he cheekily follows mum around the lagoon.

“Sea World has a successful dolphin breeding program which showcases how the extensive natural sand bottom lagoons at the park promote social enrichment and interactions which lead to breeding and nursing.

“The dolphins at Sea World are ambassadors for their species and through their educational presentations and programs, play a vital role in raising awareness of the threats facing the species in the wild along with a creating a natural caring for the marine environment.”

Sea World has a long history of working with and rescuing marine animals with the highly trained marine sciences team on call 24 hours every day, 365 days per year should a marine animal need rescuing.

For more information about the work Sea World does for the marine environment and the not-for-profit Sea World Research & Rescue Foundation go to www.seaworld.com.au/research-and-rescue.aspx