Sea World Polar Bears get into the Festive Spirit 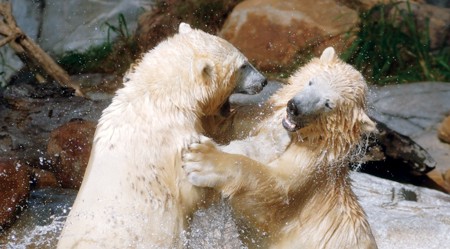 The Polar Bears at Sea World have celebrated Christmas in style with twins Hudson and Nelson opening some early Christmas presents.

Australian Sea Lions BJ and Oscar joined in on the Christmas festivities by acting as elves and delivering some specially wrapped Christmas presents to the world-class Polar Bear Shores exhibit.

Sea World Curator of Mammals, Mitchell Leroy said the Christmas treats are a great addition to Hudson and Nelson’s wider enrichment program, commenting “we have transformed Polar Bear Shores into a colourful and varied Christmas environment and wrapped presents up for Hudson and Nelson to rip apart and enjoy.

“The presents include an array of new toys, treats and food which are sure to keep them entertained and stimulated.

“This year we enlisted the help of Australian Sea Lions, BJ and Oscar to ensure Hudson and Nelson’s gifts received the seal of approval.”

Sea World’s Polar Bears are ambassadors for their species and play a vital role in raising awareness of the effects of global warming. Current research indicates that Polar Bear numbers in the wild are declining, with approximately 20,000 bears remaining worldwide.