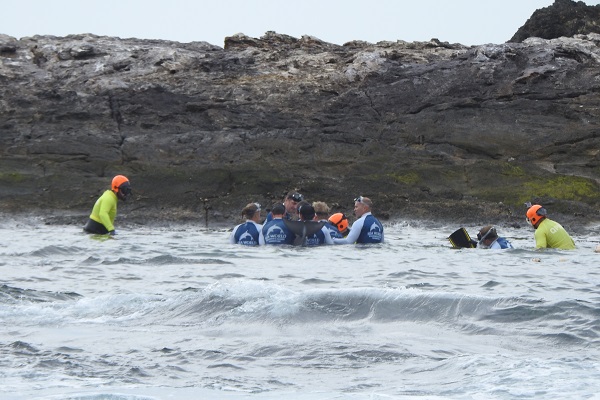 A 2 metre in-shore bottlenose dolphin has been freed from a small rock pool/lagoon at Flat Rock off Minjerribah (North Stradbroke Island) in a collaborative rescue mission spanning three days and involving three agencies.

Divers first spotted the dolphin on 5th December, but it was assumed it would make its own way out at the next opportunity. However, on 6th December observers returned and saw the dolphin remained trapped in the small lagoon on the northwest side of Flat Rock. The shallow pool is about 30 metres long by 20 metres wide with the deepest point around 2.5 metres.

Weather conditions on 6th and 7th December did not allow vessel crews to access the site. However, the Sea World helicopter flew over the lagoon on those days to assess the site and monitor the dolphin.

On 8th December conditions were favourable enough for a rescue mission. Rescuers reached the site and captured the dolphin using nets. The Sea World vet assessed the dolphin, finding no major injuries and the dolphin to be in reasonably good condition, which meant it was healthy enough for immediate release.

The dolphin was transferred to a stretcher and carried out of the lagoon and released immediately. The rescue mission took about an hour and went according to plan. 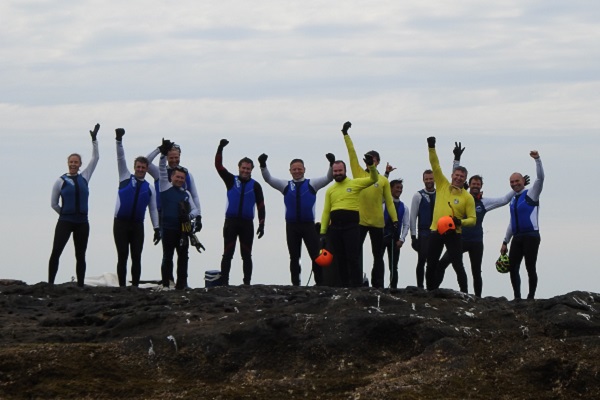 Advising that this was one of the trickier rescue operations the team has undertaken, Sea World Head of Marine Sciences, Wayne Phillips explained “we believe the dolphin made its way into the rocky lagoon at high tide chasing food and was unable to get back out to the open water.

“Thanks to the team at Sea World Helicopters, from the air we were able to monitor the dolphin over the period and put together a strategic plan on how, and when the best time would be to attempt a rescue mission,” he said.

“Despite the difficult conditions, which required rescue equipment to be boated into location, this was a fantastic outcome for this dolphin, and our experienced marine mammal and veterinarian team were proud to partner with the QPWS and QYAC rangers on this successful rescue.”

QPWS Ranger Moreton Bay Marine Park Mike Carr said the rescue mission presented challenges due to the location and the size of the lagoon.

Carr added “conditions were challenging because the rock pool was sharp and jagged and the net we were using to herd the dolphin kept snagging.

“Also, the depth of the pool in some places meant it was deep enough for the dolphin to swim under us as we were trying to rescue it. We think the dolphin could not get out because the bubbles and wash from the surf interfered with its eco-location (sonar) and it couldn’t find its way out,” he said.

The Sea World Rescue Team are on call 24 hours every day, 365 days a year should a marine animal need rescuing. Since Sea World’s opening the Rescue Team have attended many hundreds of strandings and entanglements of dolphins, whales, birds and sea snakes, pioneering new rescue techniques and equipment.

Images: Sea World and Queensland Parks and Wildlife Service staff combine to release the trapped dolphin yesterday (top) and those involved celbrate after the release (below).