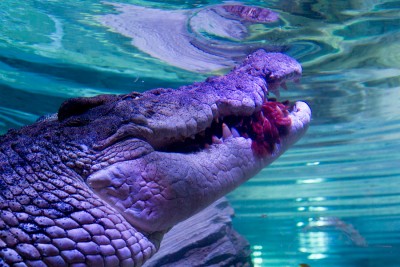 Marking the 50 year old saltwater crocodile's first public feed since arriving at his new home in September, the feast marked the final stages of his meticulous settling-in process.

Set to live another 30 to 50 years and grow several more metres, the impressive resident put on an awe-inspiring show for visitors as he snapped up a whole juicy chicken with his magnificent jaws jaws which are capable of unleashing the highest bite force of any animal on the planet today.

Todd explained "a large saltie like Pinjarra is capable of propelling himself through the water at an amazing speed to catch prey.

"This combined with an incredible jaw power is what makes saltwater crocodiles such fearsome yet astonishing creatures.

"Pinjarra's first public feed was a spectacular show of the animal's strength and is incredibly exciting.

"Not only does it mark our first Christmas with Pinjarra but it also represents the final stage of his extensive settling-in process, which can take many months for large animals like this.

"We've been closely monitoring his behaviour since his arrival.

"Each day he's exploring his new surroundings a little more, revealing something new about his personality, and lapping up the attention from his visitors!"

Visitors can come face-to-face with Pinjarra at the spectacular multimillion dollar Croc Lair exhibit which features a full 360 degrees viewing experience across three spectacular viewing levels, a walk-through croc cave as well as sneaky heads-up bubbles and a look-out boat to spy on Pinjarra's every majestic move.

With presentations and plenty of croc kids' activities on offer throughout the entire school holidays including colouring-in and special touch and feel reptilian encounters, visitors can also spend hours discovering what makes these fascinating prehistoric creatures so special.

The jaw-dropping experience of Croc Lair is just one of 12 new zones of discovery at SEA LIFE Melbourne Aquarium.

For more information go to www.melbourneaquarium.com.au