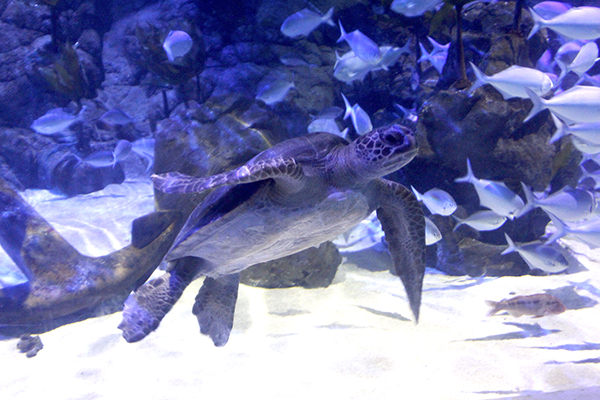 Recycling Week NZ is all about encouraging New Zealanders to be conscious about their procurement and disposal practices and adopt effective recycling habits in order to create a waste free future for New Zealand.

In the past three months alone, three rescued sea turtles have arrived at the aquarium’s Turtle Rehabilitation Centre. Te Fiti the green sea turtle came to the team in September after being found ill and dehydrated at Muriwai Beach. A tiny loggerhead hatchling named Puck was washed up on Ninety Mile Beach. Weighing in at only 182.5 grams, the tiny turtle was dehydrated and covered in barnacles. The team also tried to help save a hawksbill turtle found washed up at the Bay of Island earlier this month but unfortunately the turtle did not survive.

Te Fiti and Puck join Taka the Eastern Pacific green and two loggerheads named Abby and Kibou in their recovery at SEA LIFE Kelly Tarlton’s, which is New Zealand’s only turtle rehabilitation facility. The team monitor their health closely and, where necessary, treat wounds, administer antibiotics and feed the turtles via tubes.

Taka, Abby and Kibou are currently swimming in the aquarium’s Turtle Bay display for all guests to see, whereas Te Fiti and Puck are behind-the-scenes undergoing treatment. The team is aiming to release the turtles back into the ocean in the future.

This week, SEA LIFE Kelly Tarlton’s is sharing social media content that seeks to educate people about recycling and to provide practical tips for people to put in action at home, work or school.

Van de Pas added “we are encouraging New Zealanders to get involved in Recycling Week and learn how to adopt positive recycling habits to help prevent more turtles from ingesting plastic that could have been recycled. We also want people to remember to call 0800 DOC HOT if they come across any sick or stranded sea turtles on our shores.”

SEA LIFE Kelly Tarlton’s has cared for more than 100 turtles over the past 20 years as part of ‘Team Turtle’ together with the Department of Conservation and contracted vets from Auckland Zoo.

For further information about Recycling Week including recycling tips and challenges, visit www.recycle.co.nz/recycleweek.php

SEA LIFE Kelly Tarlton’s is currently open from Thursday to Monday. All visitors must pre-book their tickets online in advance. Visit www.kellytarltons.co.nz for more information.