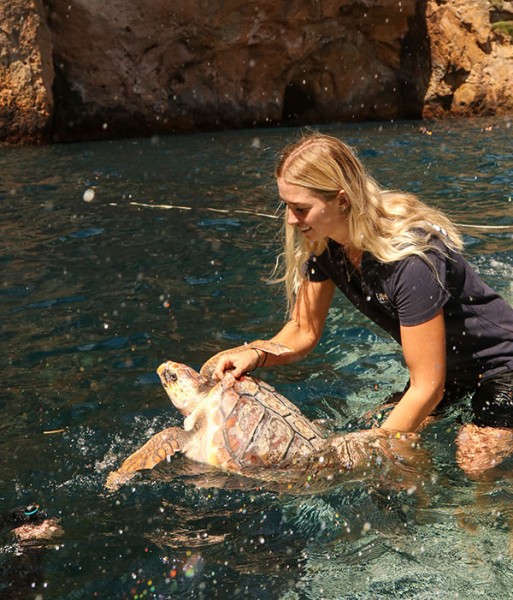 Following their successful rehabilitation at SEA LIFE Kelly Tarlton’s Aquarium, two rescued sea turtles have been released back into the ocean.

SEA LIFE Kelly Tarlton’s is home to New Zealand’s only Turtle Rehabilitation Centre, which has rehabilitated and released over 50 sea turtles over the past 23 years. The Aquarium is part of Team Turtle, which also includes Auckland Zoo and the Department of Conservation, with support from Air New Zealand.

A team from the Aquarium were joined by kaumatua of Ngātiwai for the heart-warming release of Kibou and Spock, who returned to the ocean off the coast of Tutukaka after receiving a karakia (Māori incantations and prayers ).

Kibou is a loggerhead turtle who was found stranded on Muriwai Beach and came to SEA LIFE Kelly Tarlton’s in October 2019 suffering from a severe shoulder wound and a nasty lung infection. Following urgent treatment at Auckland Zoo’s vet hospital, the team nursed him back to health with intensive care and antibiotic treatments, eventually helping him to recover and gain an impressive 13kgs ahead of his release.

Spock is a green sea turtle who was also found on Muriwai Beach and came to the team in September 2020. Spock had serious injuries to the digits on both of her front flippers that had to be amputated. Thanks to the amputation of these digits, Spock has made a full recovery and was ready to return to the ocean.

The release of Kibou and Spock took place on Wednesday 17th March, the 35th anniversary of the passing of globally renowned adventurer Kelly Tarlton, who founded the Aquarium to share the wonders of the ocean and its inhabitants.

According to Louise Greenshields from SEA LIFE Kelly Tarlton’s, the annual turtle release is always an incredibly rewarding experience and this year was no different adding “It’s always emotional when we release turtles back into the ocean as it’s a time for us to reflect on how far they have come during the rehabilitation process. Our team of Aquarists work with these turtles every day and form a genuine attachment so Kibou and Spock will certainly be missed but we wish them all the very best.

“I would love to say that all turtles are as lucky as Kibou and Spock but unfortunately that’s not the case as there are significant threats facing turtles in the wild. Most of the turtles that come through our Turtle Rehabilitation Centre have been affected by human impacts of some kind, whether it be boat strikes, entanglement, plastic ingestion or habitat destruction. Our aim is to educate the public and encourage behavioural change.”

Dr James Chatterton, Veterinary Services Manager at Auckland Zoo notes “providing the initial emergency veterinary treatment then follow-ups for these turtles that are critically ill when DOC first brings them to us, and working alongside our conservation colleagues at SEA LIFE Kelly Tarlton’s to help give these marine animals a second chance at life, is a real privilege and incredibly rewarding.

“Conservation is all about working together and sharing expertise to achieve the best outcomes for wildlife and Team Turtle is a fantastic example of this.”

According to Julie Kidd, Strategic Partnerships Advisor, Department of Conservation “It is very exciting to see rehabilitated turtles returned to wild. We love working in partnership with the team of experts at SEA LIFE Kelly Tarlton’s.”

Kibou and Spock were first treated behind the scenes in the Aquarium’s Turtle Rehabilitation Centre before moving into the Turtle Bay display, where they were ambassadors for their species, helping educate guests on the need for conservation and protection. Now that Kibou and Spock have returned to the ocean, Turtle Bay is still a temporary home to rescued sea turtles including Taka, Puck and Abbey until they too are ready to return to sea.

Although turtles breed in the tropics and subtropics, five of the seven turtle species are seen in New Zealand waters. Team Turtle urges people to report injured or stranded turtles to the DOC emergency hotline on 0800 DOC HOT (0800 362 468).

The Aquarium is open Thursday – Monday during the school term and seven days a week during the school holidays. All visitors must pre-book their tickets online in advance. Visit www.kellytarltons.co.nz for further information.