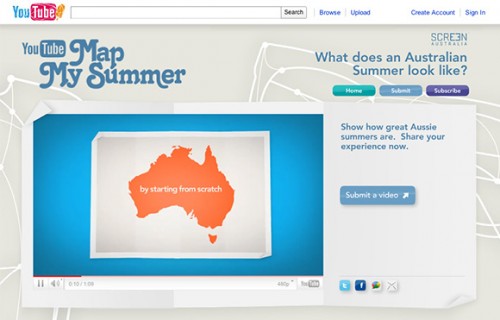 Screen Australia has announced its collaboration with YouTube on the national online initiative, YouTube Map My Summer, which aims to engage the nation in sharing the collective Australian summer experience.

Legendary filmmaker Dr George Miller (Mad Max, Babe, Happy Feet) and the Sydney Film Festival have come on board with Screen Australia to lend support to the initiative.

YouTube Map My Summer aims to capture the essence of this pivotal time of year, as experienced by Australians through their own eyes. Australians have been invited to pick up their cameras and upload their videos to the YouTube Map My Summer portal. This could be anything from a snippet of spontaneous mobile phone footage to a short film. The only requirement is that it must have been shot after 1st December 2010 and is an expression of summer.

Screen Australia joins the initiative with the launch of three short films directed by upcoming local filmmakers Ariel Kleiman, Luke Doolan and Amy Gebhardt and produced by Louise Smith. The filmmakers were asked by YouTube and Screen Australia to create their own personal testament to the Australian summer, to inspire the nation to upload content to the Map My Summer portal. Their films are revealed today for the first time on Screen Australia's new YouTube channel: youtube.com/screenaustralia.

Dr George Miller will select and mentor one of these talented filmmakers to create a final short film funded by Screen Australia using the uploaded footage from the YouTube Map My Summer portal. This film will then have its premiere at a gala event at the Sydney Film Festival in June 2011.

Screen Australia's Head of Marketing Kathleen Drumm explains "the Australian summer has a special place in our cultural identity and experience. It may be a time of simple pleasures and regeneration, or as we've seen, one of extreme natural disasters, bringing grief and loss to many. Sharing our stories through this initiative provides a chance to create a reflection of our collective experience, marking a moment in time in Australian history."

Five Australians whose footage is included in the final film, will be invited to attend the premiere screening at the Sydney Film Festival, with return flights to Sydney and accommodation provided.

Drumm says "Screen Australia is thrilled to be working with YouTube on this initiative. It will provide a unique opportunity to profile upcoming filmmakers in the online space to a broad audience.

"In developing this project with YouTube, we have taken inspiration from Kevin Macdonald and Ridley Scott's groundbreaking filmmaking experiment Life in a Day, which premiered at Sundance last week."

Ernesto Soriano, YouTube's Product Marketing Manager said, "YouTube Map My Summer will capture the diversity of the legendary Australian summer and share it with the world. We're delighted that Screen Australia is drawing inspiration from this project to take your videos to the big screen. Whether you're in Broome, Bourke, Darwin or the Dandenongs, grab a video camera and share the story of your summer down under."

YouTube Map My Summer is the first step in encouraging Australians to get involved in sharing their stories with the nation. Screen Australia's new YouTube channel, also launching today, aims to encourage audiences to connect with the local screen content industry.

Drumm adds "Screen Australia aims to grow and expand audiences for Australian content. Working with local distributors, we are able to complement their Australian release strategies by providing a new platform designed to communicate directly with audiences."

The Screen Australia YouTube channel will be made up of several different components. The Vault will highlight archival footage celebrating our cultural heritage, while Behind the Scenes will take audiences into the real world of film and television production. Red Carpet will follow Australian filmmakers as they travel the world celebrating their achievements at key international events, such as the Cannes Film Festival, Sundance or the Oscars®. New Australian trailers will also go online to get a sneak peak of upcoming premieres and events.

Submissions to YouTube Map My Summer are being accepted online until 31st March.

For  more information go to www.screenaustralia.gov.au/mapmysummer