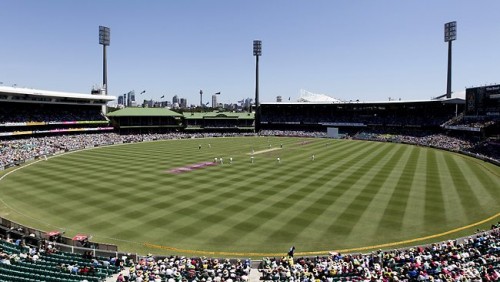 The Sydney Cricket Ground's 100th cricket Test has been named winner of the prestigious Sport Event of the Year Award at the global 2013 Stadium Business Awards.

The Award covers the best sporting event held at a stadium, arena or major sports venue in 2012.

The past two Sports Event of the Year Award winners were the FIFA World Cup Final in South Africa and the UEFA Champions League Final at Wembley Stadium.

The SCG became only the third ground worldwide to have hosted 100 cricket Tests when Australia defeated India by an innings and 68 runs.

The match was highlighted by the record-breaking innings of 329 not out played by Australian captain Michael Clarke, and the twin centuries made by Ricky Ponting and Michael Hussey.

The Judging Panel stated "proving that it's not just new venues - or one-off events - that define a venue's 'greatness' but fundamentally it's about longevity. When we talk about stadiums have a lifespan of 20-30 years these days, it took SCG 130 years to reach its landmark 100th Test a milestone event (shared by very few other venues) that's a deserved winner."

NSW Minister for Sport and Recreation, Graham Annesley, congratulated the SCG Trust saying it was a massive international achievement.

Minister Annesley stated "when you look at the quality of the other finalists, it is a clear demonstration of just how outstanding the 100th cricket Test at the SCG was in every aspect."

SCG Trust Chief Executive Jamie Barkley, said the Award was a credit to all SCG staff, Members, the Australian and Indian cricket teams, Cricket Australia and to cricket fans.

Barkley added "this Award is shared by all who participated and attended the SCG's 100th Test. It was milestone event in the history of the SCG and in world cricket and we are proud that it has been independently recognised by a panel of experts as the 2012 Sports Event of the Year."

To celebrate the SCG's 100th Test, the Trust commissioned an expert panel of former players, cricket journalists and sports historians to nominate the '10 most significant SCG Tests' ever played.

The panel also selected the best Australian XI and World XI teams based on their performances at the ground over the preceding 130 years.

Public and Member walkways throughout the ground were lined with large still photographs of some of the SCG's greatest Test moments, and the SCG Museum hosted a special exhibition of memorabilia that recalled many of the most significant and controversial events in this 'century of Tests'.

To record the Test in a unique way, 12 artists were commissioned to work from the stands and create works that captured some special aspect of the on-field action or the atmosphere of the historic match.

These works were promoted through the media and via the Trust's website before being auctioned online to raise funds for the McGrath Foundation, in support of Jane McGrath Day.

The Trust also designed a bespoke 100th Test logo that featured on special merchandise and publications, as well as on the commemorative cap that was presented to players and officials on both sides.

Christchurch's temporary AMI Stadium won the prestigious Project of the Year Award at the Awards.