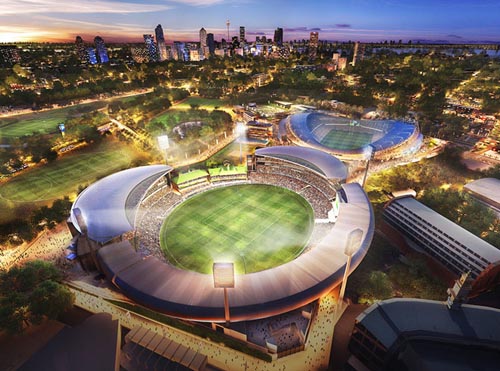 The SCG Trust has released details of its "grand vision" master plan which incorporates and links the Sydney Cricket Ground, Allianz Stadium and surrounding lands into a sports, entertainment and public recreational precinct within minutes of the Sydney CBD.

The Trust's Master Plan is the long-term developmental blueprint which will see continuing generations of sports lovers and concert goers experience, in a high level of comfort, the passion, atmosphere and history of year-round live events at both the SCG and Allianz Stadium.

The Master Plan also incorporates a new landscape for improved community parklands and sporting fields which would see the new Moore Park rival great sporting parklands such as Hyde Park in London, Millennium Park in Chicago and Olympic Park on Munich.

Key features of the Master Plan are;

• Completion of the new Northern Stand, currently under construction at the SCG
• Redevelopment of the Churchill , Brewongle and O'Reilly Stands
• A new public plaza between the SCG and Allianz Stadium which allows direct access between Paddington and Moore Park. The Plaza would become a live site, complete with video screens on event days, plus cafes and restaurants
• An new extended or fully covered roof over Allianz Stadium
• A new LED façade mesh for Allianz Stadium which would allow the exterior to change colours to suit the home team
• A new transport infrastructure covering light rail, buses and a new network of pedestrian routes linking the precinct to the city, Central Railway Station and Paddington
• Underground car parks on the current MP1 car park (1,600 cars) and on the western side of Anzac Parade (2,500 cars)
• Parklands would be regenerated and playing fields on the western side of Anzac Parade would be established

SCG Trust Chief Executive, Jamie Barkley, said the Master Plan builds on the history and tradition of the SCG and its surrounds, including the Entertainment Quarter and the Hordern Pavilion.

Barkley explains "the precinct has been Sydney's centre of sport and entertainment and for over 150 years and the Master Plan builds on this history.

"This Master Plan incorporates a whole of precinct approach which involves upgrading and improving facilities, transport, parking and pedestrian access.

"This Master Plan will benefit all of Sydney and the user-friendy transport, parking and pedestrian initiatives will reduce congestion for local communities and residents and provide positive benefits on a daily basis across the wider metropolitan transport network."