Santos Tour Down Under aims for biggest ever crowds 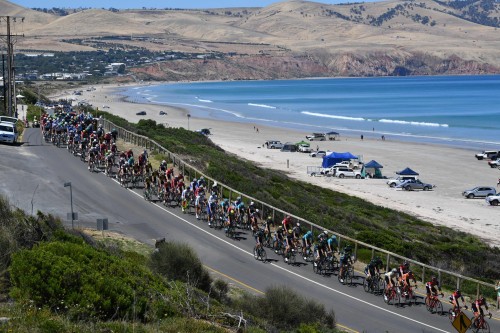 With the Santos Tour Down Under celebrating its 20th year, South Australian Tourism Minster Leon Bignell wants to see a million people line the routes of the biggest cycling event outside of Europe.

Starting this weekend, the nine-day event will put South Australia on show to the world as the biggest cycling names battle it out through the city, suburbs and some of picturesque vineyards, hills and seaside towns.

Minister Bignell stated “this is a massive year for the Santos Tour Down Under and the riders, teams and organisers want to see massive crowds to celebrate the occasion.”

Teams from all around the world have arrived in Adelaide and are already hitting the roads as part of their training, including superstars Peter Sagan, Andre Greipel, Richie Porte and Caleb Ewan.

The action begins today (Thursday 11th January) with the newly upgraded UCI 2.1 classification Santos Women’s Tour Down Under, which will see elite international and Australian female cyclists battle it out across four exciting stages.

The official opening of the Santos Tour Down Under will take place on Saturday (13th January) in the City of Adelaide Tour Village in Victoria Square.

ARIA award winning performer Guy Sebastian will return to his hometown to help kick of the celebrations, performing at the Team Presentation Concert this Saturday in the City of Adelaide Tour Village in Victoria Square.

The race also attracted a record number of spectators with almost 840,000 fans lining the streets and approximately 43,000 cycling fans making the journey from interstate and overseas for the event (compared to 39,000 in 2016).

Image: Santos Tour Down Under competitors pass one of South Australia's beaches. Courtesy of Facebook.