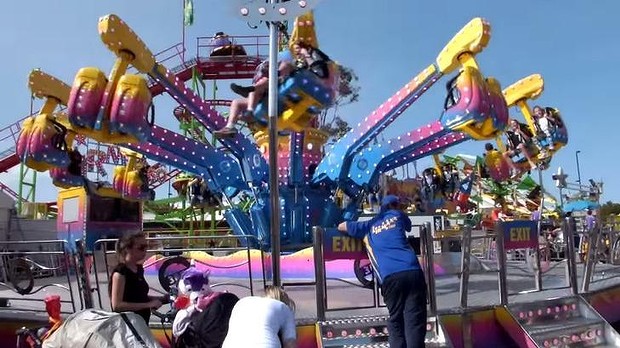 With hundreds of thousands of South Australians expected to visit the 2015 Royal Adelaide Show both show organisers and Safework SA officers have promised an increased focus on safety at this year's event.

Extra Safework SA officers will patrol the Show, which opens on Friday (4th September), following the death last year of a child after she was flung from ride.

Safework SA is understood to have completed its investigation into the death of Adelene Leong, aged eight, who died after being tossed 10 metres from the Airmaxx 360 ride during last year's Show.

According to a report in Adelaide newspaper The Advertiser, Safework SA have determined there is enough evidence to refer the case to South Australia's the Director of Public Prosecutions.

While its investigation has been completed into the fatal accident on 12th September last year, SafeWork SA Executive Director Marie Boland told reporters a decision on whether to press charges was with the DPP who is apparently deciding whether to lay formal charges.

Boland stated "causation in any workplace incident, or any incident like this, is a question for the courts."

Adding that that the investigation into the Airmaxx 360 had been “technical and complex” investigation, Boland "we don’t make recommendations.

"Our process is our investigators do their investigations and hand it over to the legal people so they can make assessments."

The Advertiser reported that any prosecution would be linked to alleged mechanical issues, rather than a case based on claims of human error by workers.

It is also believed that, based on evidence presented by SafeWork SA, Crown Solicitor’s office lawyers have “recommended” people “linked” to the ride, which flung the child to her death, should face court.

South Australian Police are also said to believe charges should be laid.

Their investigation into the ride’s Victorian-based owners - who remain banned from operating the machinery - is still in progress.

Police are also conducting an investigation and Sturt Crime Investigation Branch detectives are compiling a “comprehensive report” for the coroner. Although the investigations are separate, it is believed information has been shared.

In setting up the 2015 Show, The Advertiser has also reported that a SafeWork SA audit of ride operators uncovered “minor” issues linked to some amusement rides.

Imported to Australia in 2013, the Airmaxx 360 ride was making its first appearance at last year's Show, and had been billed by Show organisers as "’for kids who want to scare mum and dad witless."

In 2000, 37 people were injured when the Spin Dragon ride collapsed in sideshow alley at the annual Show.