Following an inspection of all attractions, a desktop review of compliance materials, an engineering review of all rides and a review of operating procedures, Worksafe Queensland found  no issues relating to guest safety.

Village Roadshow Theme Parks Chief Executive Tim Fisher said the company was proud that the audit outcome reflected its focus on the safety of guests and team members.

Fisher explained “the safety and wellbeing of our guests and team members remains our number one priority and is deeply woven into the culture of our company.

“All of our rides undergo rigorous daily, weekly, monthly and annual inspections. In addition, we have third party safety auditing on our rides on an annual basis.

“Village Roadshow Theme Parks welcomed the Government’s initiative to further enhance safety within the industry, and we will continue to work with all regulatory bodies to support such initiatives.”

Encouraged by this, Queensland Tourism Minister is hoping that visitor confidence in the Gold Coast’s theme parks will result in strong crowds during the summer school holidays. 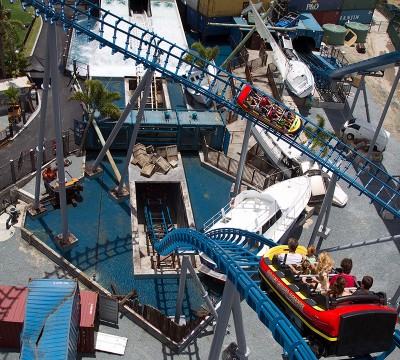 Minister Jones said the safety audit showed that holidaymakers could enjoy themselves with confidence.

Minister Jones emphasised that theme parks are a vital part of the Gold Coast tourism economy, adding “the Gold Coast is Australia’s tourism playground and our theme parks play a big role (they are)  critical to the diversity of products and experiences that we offer.”

The Gold Coast attractsmore than four million visitors every year and last year more than 902,000 of those visitors were from overseas - a 6% rise on 2014.

Overnight expenditure in 2015 was more than $3.9 billion. While domestic visitors make up 80% of visitation, international visitors are having longer stays making up 37% of visitor nights from 2010 to 2015.

Images: Superman coaster at Movie World (top) and the Storm Coaster at Sea World (below)