The Crusaders and Canterbury teams would be prepared to return to Christchurch’s Lancaster Park if the earthquake damaged stadium is repaired.

Riach stated "we were happily there before the earthquake (and) if it's viable, then we would clearly go back."

The idea of fixing the old AMI Stadium has been resurrected following comments from Tim Sole, Chief Executive of council insurer Civic Assurance, that three assessments had concluded the earthquake-damaged ground could be fixed for $50 million.

With the venue insured for $143 million, the New Zealand Government and the Christchurch City Council have committed to building a new stadium closer to the city centre under their Cost Sharing Agreement, with the Council planning that its insurance payout would meet some of its $253 million contribution.

With Canterbury rugby based at the temporary, 15,000-seat AMI Stadium in Addington since 2012, Raich added that the current uncertainty over the future of a major stadium in Christchurch was unhelpful. 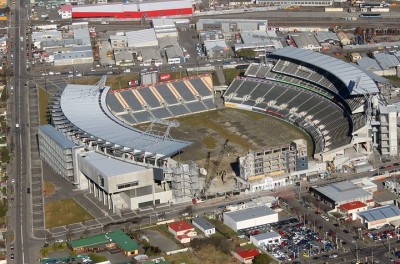 Meanwhile the Keep Our Assets Canterbury lobby group is backing the repair of Lancaster Park, saying it would eliminate the need for a “white elephant” new rugby stadium, which it says “Christchurch can’t afford, which nobody wants, and which would be a millstone around the neck of future generations.”

A statement from the lobby group says that “fixing Lancaster Park (the old AMI Stadium) would remove more than $250 million from the Christchurch City Council’s capital expenditure programme, including $110 million of borrowing, and help bring the grandiose spending plans closer to projected income.”

Images: Lancaster Park in use as AMI Stadium prior to the earthquakes (top) and showing the liquefaction that occurred after the February 2011 earthquake (below).