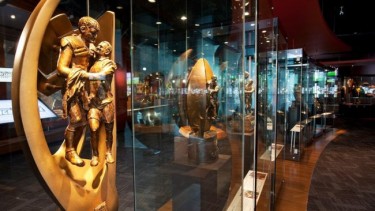 Officially launched on the anniversary of the establishment of the game in 1895, the name museum is further good news for the game on the back of its recent record television rights deal.

The launch was attended by ARL Commission Chairman John Grant and interim ARL Commission Chief Executive Shane Mattiske along with current and former stars, among them Johnny Raper, the Churchill family and one of the game's oldest surviving first-grade players, Bill Harris, aged 96.

The museum features priceless items such as a cap worn by Dally Messenger, the game's first premiership trophy, famous jerseys and tributes to the Team of the Century, the Immortals and the Hall of Fame.

There are interactive displays featuring player statistics, a wall of fame featuring Australia's 100 greatest players, and commercials from every year of State of Origin.

It is managed by former Penrith prop Frank Puletua and historian Terry Williams.

"There's so many stories and so many items - this is probably not even 10% of the league's archival collection."

Plans are underway for a similar permanent exhibition at Suncorp Stadium in Brisbane.

The Rugby League Museum is open Wednesdays and Thursdays from 11am to 2pm. Admission is free.